Chicken Biryani is a bold and flavorful Indian dish with crazy tender bites of chicken with bell peppers in a deliciously spiced and fragrant rice.

Vegetable Biryani was the first Indian rice dish on the menu and now we’re making all of our favorite Indian recipes including Indian Butter Chicken and Easy Chicken Tikka Masala. 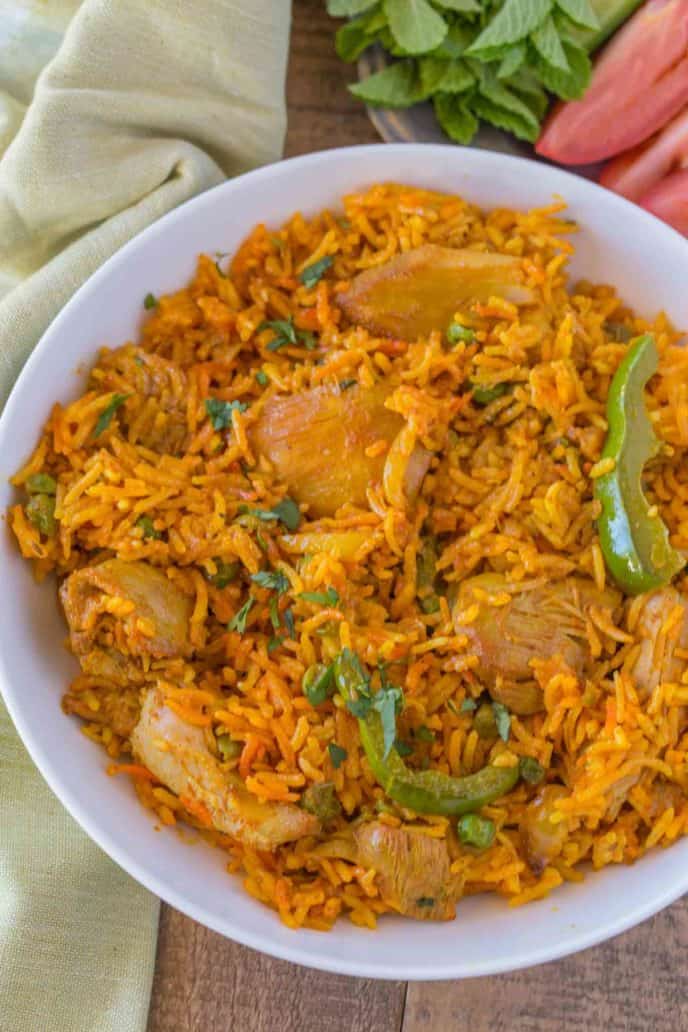 This easy Chicken Biryani recipe is a dish I actually have fumbled with a few times. The mixture of chicken that’s been browned in the skillet before cooking down with the liquids until it is meltingly soft. You’ll find your rice is fluffy and soft with tender bites of chicken throughout.

This biryani is easier than most, no whole spices being toasted and ground. No red curry paste or ginger garlic pastes are needed. The resulting flavors are incredibly delicious and addicting.

What to serve with chicken biryani:

We love serving this with Indian Raita, sliced cucumbers and tomatoes, naan and Easy Tandoori Chicken.

What kind of rice is used in vegetable biryani:

A classic biryani is made using basmati rice. This rice is thinner and longer than a traditional long grain rice. 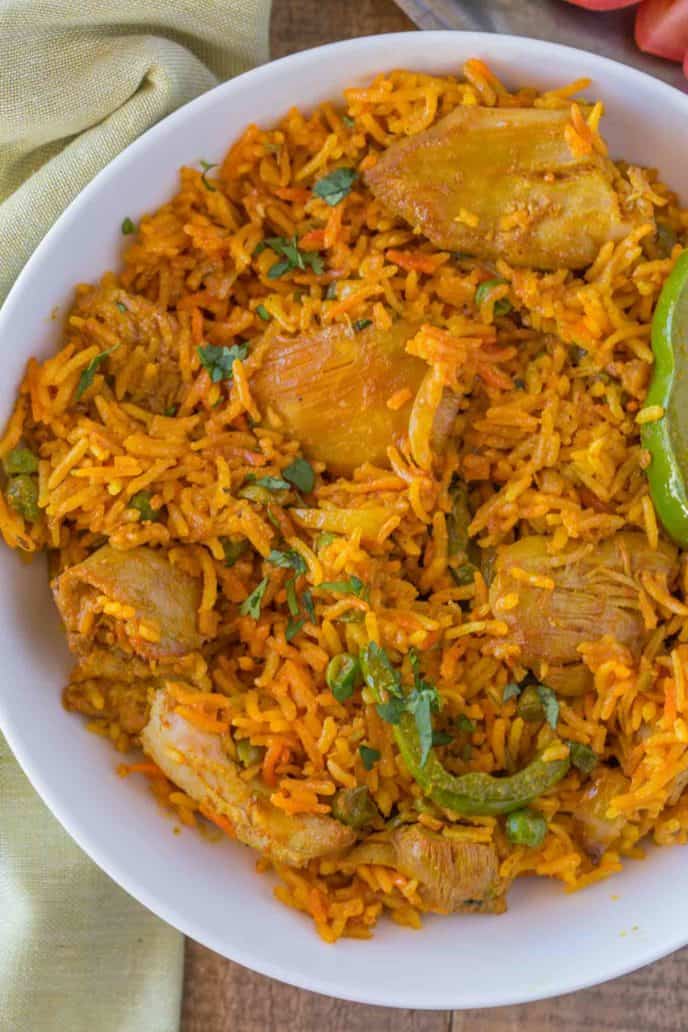 How do you make chicken biryani?

First you brown the chicken and onions. Then some grated tomato is added to the chicken and liquids before cooking down until soft and fluffy. The rice is traditionally made using ghee (clarified butter) along with onions, garlic and ginger.

Why is biryani rice yellow?

The yellow coloring in the rice comes from the use of turmeric along with other spices. These spices are added into the dish before the uncooked rice is mixed in.

The best way to reheat chicken and rice dishes:

Add the mixture to a microwave safe bowl and cover with an almost dripping wet paper towel draped over the bowl or plate.  Microwave on high for 3-4 minutes. 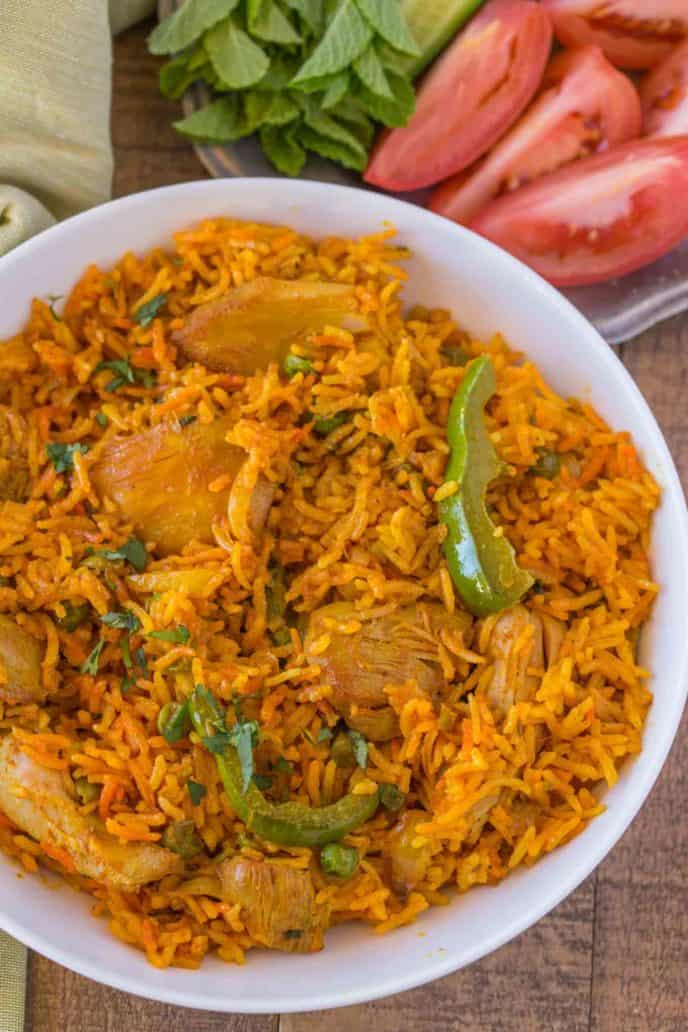 Tools used in the making of Chicken Biryani:
Basmati Rice: The perfect rice for the biryani, do not substitute long grain rice.
Cast Iron Dutch Oven: I used to fry in my cast iron skillet, but this dutch oven is perfect for cooking the vegetables and rice, maintaining heat without any hot spots that may burn the food. 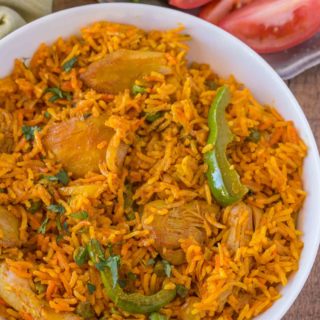 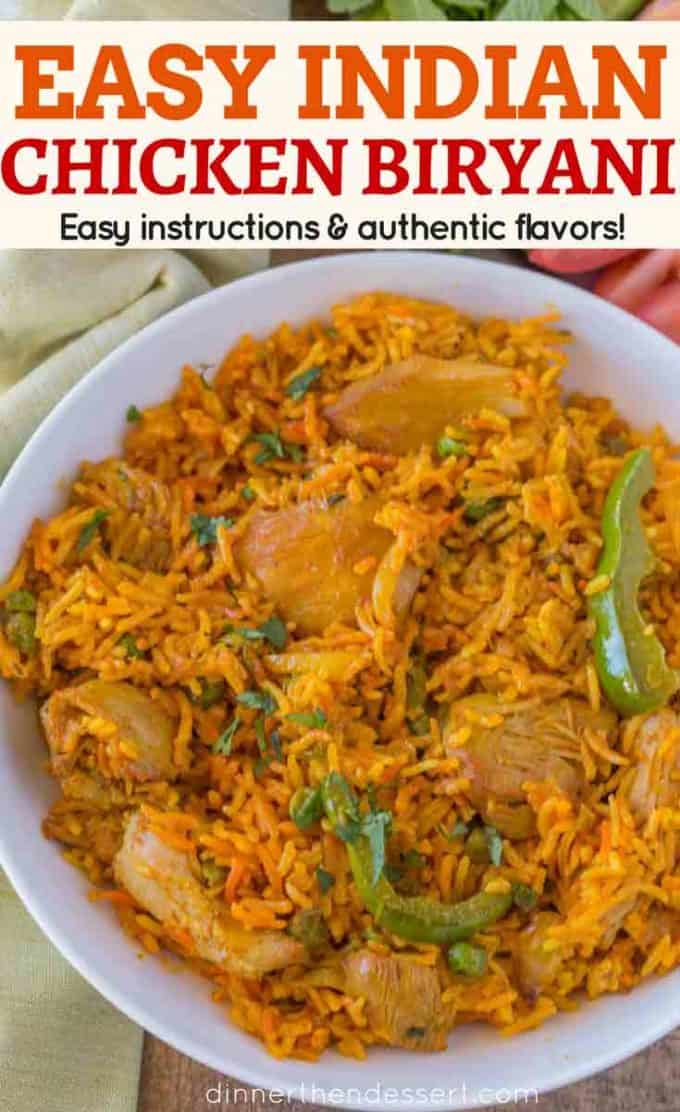