Homemade Cool Whip that is stable like the store bought kind but made at home and SO delicious. Perfect for your favorite family recipes!

Homemade Cool Whip is part of our Dinner, then Dessert Kitchen Pantry Series. Now you can recreate your family’s favorite recipes using whole ingredients instead of processed, such as Condensed Cream of Mushroom Soup, Marinara Sauce, or BBQ Sauce.

Homemade Cool Whip takes less than a half hour to “whip” up and gives you a light, fluffy creamy texture with the sweet flavors you know and love, without any of the processed ingredients! This recipe will quickly become a favorite to use successfully in dozens of cool whip recipes.

You’ll feel so much better about giving your kids this Homemade Cool Whip to dip with their favorite fruit, or use it to top a pie or mix into your favorite recipes. It can be made ahead of time and kept in the fridge or freezer for when you need it in a pinch. Using gelatin and a few wholesome dairy ingredients, plus pure vanilla, you’ll never want to buy the commercial tub again!

The consistency is both room temperature stable AND freezer safe. The gelatin keeps its stability under 98 degrees and it protects the water content safe in the freezer.

What is the difference between Cool Whip and Whipped Cream

Whipped Cream is not stabilized with gelatin, and will likely break if warmed to room temperature, frozen, or mixed into a recipe. This recipe is exactly what you’re looking for, Cool Whip, not whipped cream.

Why do I need to use a thermometer to make Homemade Cool Whip?

It is important to heat and cool the ingredients to the temperatures specified. Don’t make the recipe without a thermometer. It isn’t difficult to make, but you do need to reach a specific temperature that you can’t guess.

Tools Used in the Making of Homemade Cool Whip

Powdered Milk: Good to keep in your pantry if you only use milk sparingly for recipes or use powdered milk for other recipes.
Candy Thermometer: Inexpensive and indispensable in this recipe.
Gelatin: Same kind you’d use in jellies, you can also use store brand.

How to Store Homemade Cool Whip 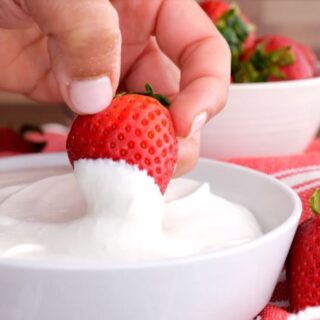