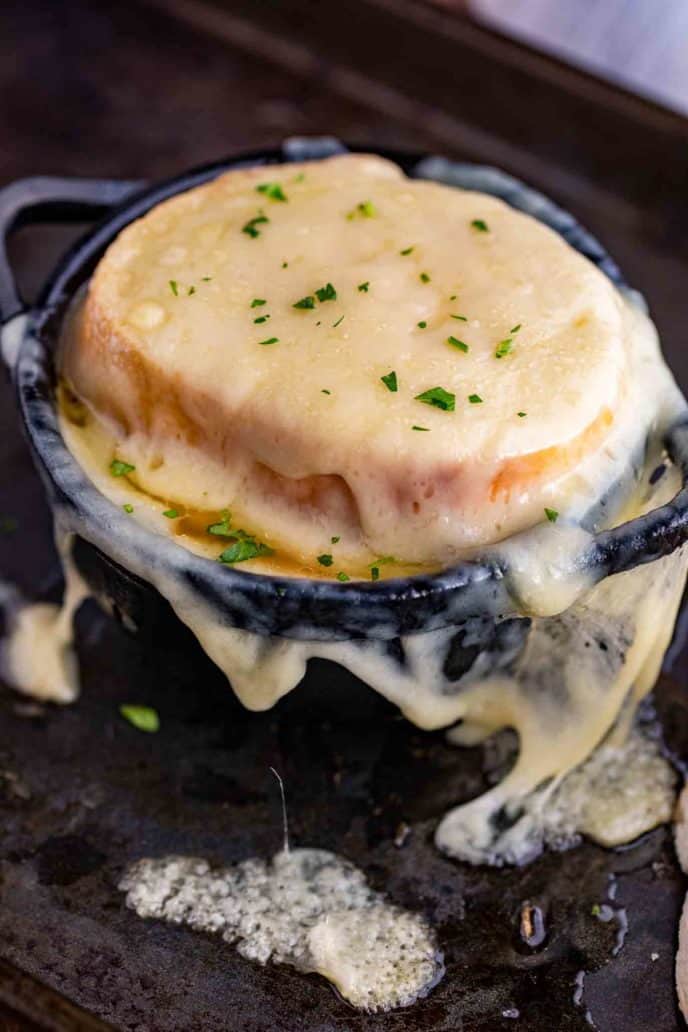 French Onion Soup is the PERFECT combo of sweet caramelized onions in a savory broth, topped with crunchy toasted french bread and gooey broiled cheese. You can melt the cheese in a toaster oven, or on a baking sheet under the broiler in the regular oven, if your soup bowls are oven-proof.

I don’t know anyone who can pass up this onion soup, especially when it’s just out of the oven and the broiled cheese is bubbling and gooey. There’s a lot of really nice flavor going on here, so I like to serve this soup with a something simple like a wedge salad or extra garlic bread.

Homemade french onion soup will last tightly sealed and refrigerated for 3-4 days. Wait to add the bread and cheese until you’re ready to serve.

CAN YOU FREEZE FRENCH ONION SOUP?

This french onion soup recipe is perfect to make ahead and freeze. It will keep in the freezer for about 3 months.

Remember that this onion soup is heavy on the broth side, so it might take longer to defrost in the refrigerator. I would take it out the day before you’re going to eat it.

WHAT ONIONS SHOULD YOU USE FOR FRENCH ONION SOUP?

This recipe calls for a sweeter variety of onion, because the sweetness plays off of the savory flavors in the beef broth and wine. Plus they only get sweeter when you caramelize them.

I like to go with yellow onions because they’re easy to find and cost-effective. You can also use Vidalia onions if you have them, which are slightly sweeter and more mellow.

WHAT TYPE OF CHEESE IS ON FRENCH ONION SOUP?

Traditionally, french onion soup is topped with Gruyere. I’ve also made this using aged provolone, which is still melty like Gruyere and has a nice sharp flavor that compliments the onions well. Plus it gets gooey and slightly crispy on top when you broil it. 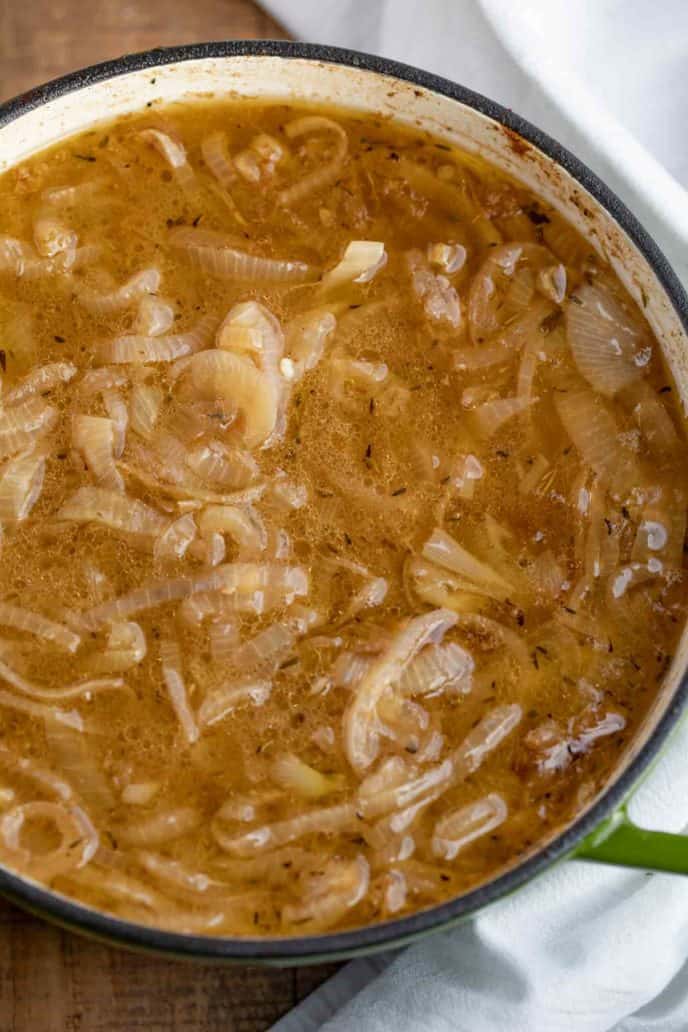 WHAT KIND OF WINE CAN YOU USE FOR FRENCH ONION SOUP?

Traditionally the recipe calls for dry sherry, which is a type of wine that’s fortified with brandy. If you’re not a fan of sherry, you can use any dry wine.

Because the onions are sweet, I would recommend something like cabernet sauvignon, or similar. You can also use straight brandy. 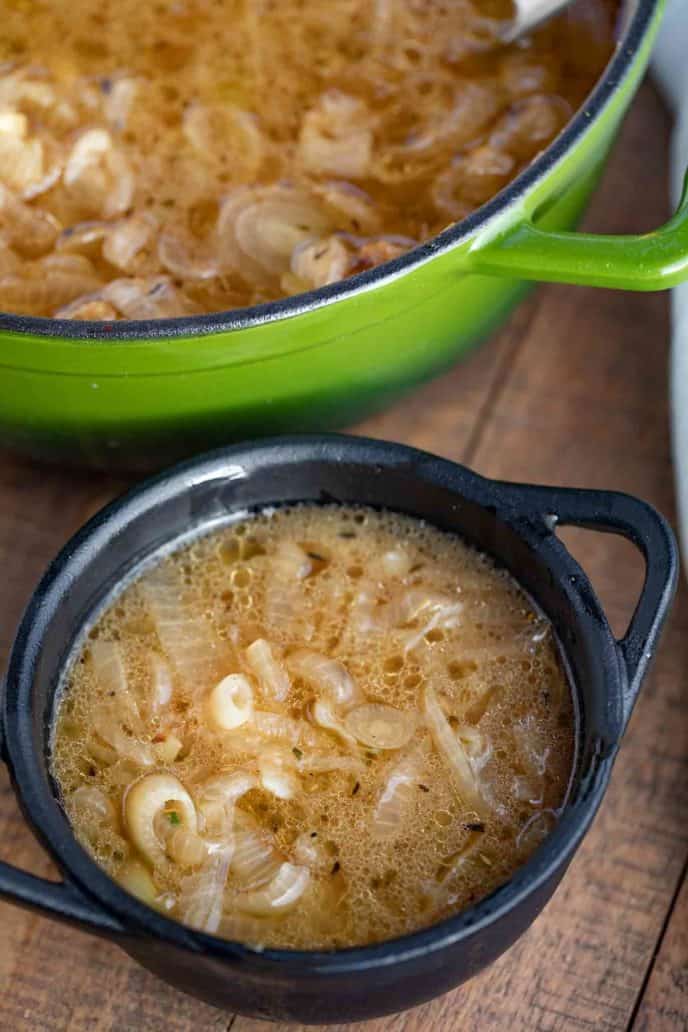 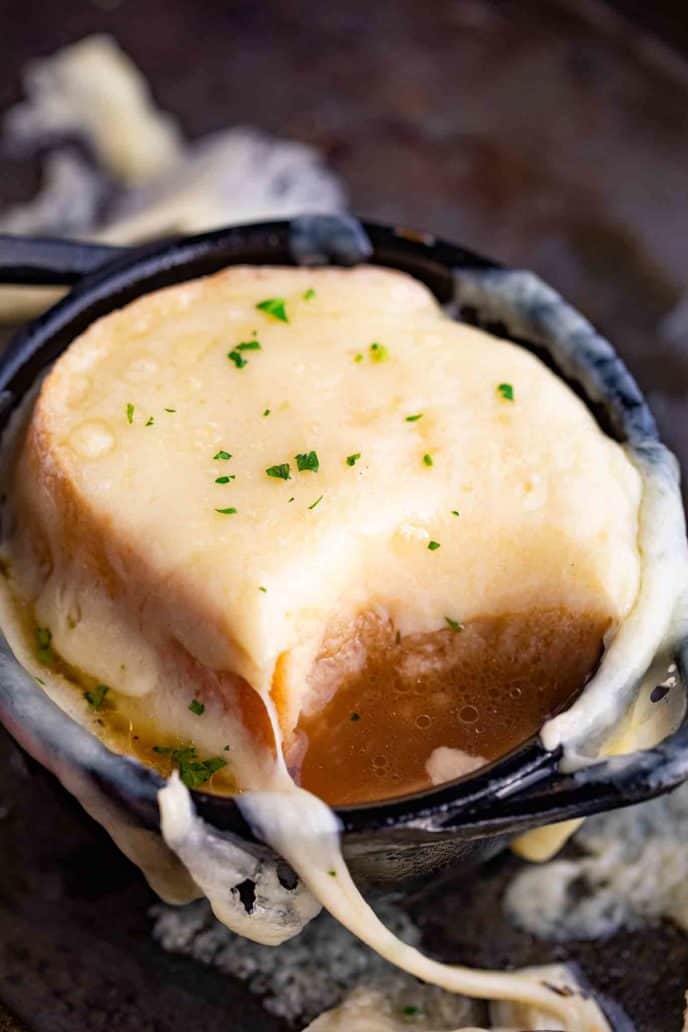 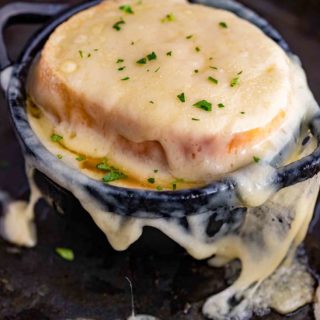