One Pot Mexican Chicken and Rice made with chicken thighs and seasoned Mexican rice with vegetables baked until tender in the oven. 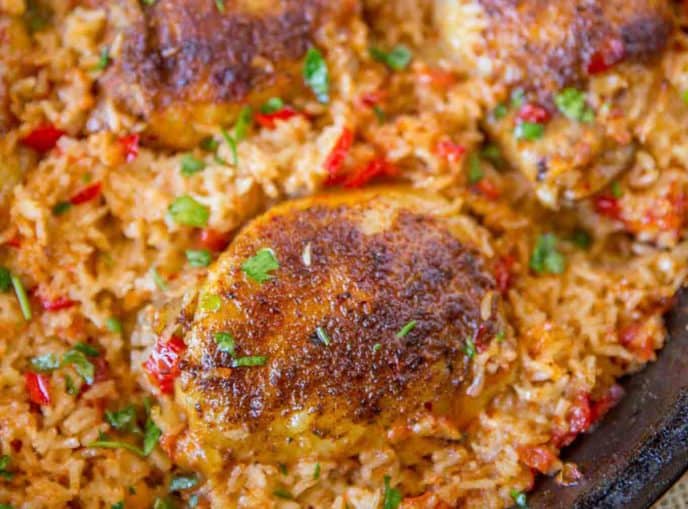 One Pot Mexican Chicken and Rice is so full of flavor and EASY! Plus the rice combines to make this deliciously soft, creamy and crispy texture that meant I was standing at the counter scooping up every last bit so it didn’t get wasted in the sink.

While this isn’t a classic arroz con pollo this is a definite take on the recipe. We love cooking chicken and rice in the same pot together, it makes such an easy meal with the smallest amount of cleanup!

The chicken in the dish is browned before being added to the pot with the rice, and the rice itself bakes in the oven. Topping the chicken with herbs and spices and the liquids from the chicken releasing into the rice while it is cooking makes for the richest flavors.

The rice in this dish is a variation of a super easy Mexican rice that uses salsa and chicken broth in making it. Depending on what I have on hand I’ve previously used fresh or jarred salsa. While they do taste different they are both completely delicious.

Totally off topic but awesome chef’s tip? If I have something like leftover Chimichurri Sauce I make rice with it! Add ½ cup or so (drain almost all the oil) and add to chicken broth for amazing rice. 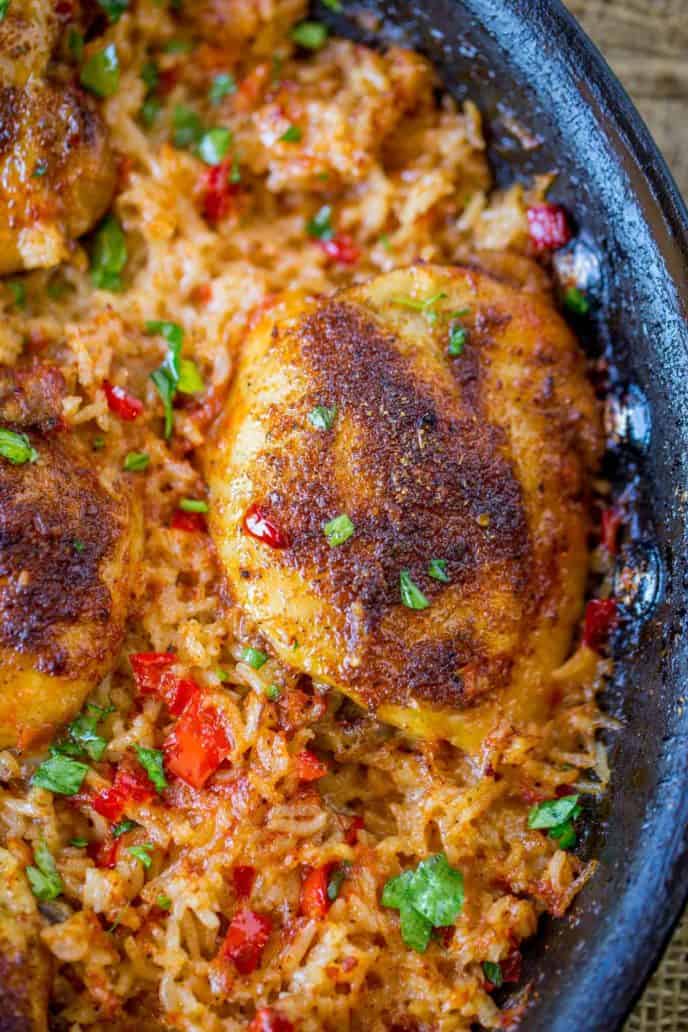 Want to make the Mexican Chicken & Rice with white meat?

From a reader, Bryce, who made the One Pot Greek Chicken and Rice recipe with boneless chicken breasts:

Just FYI for anyone in the future who was wondering if you could make this with boneless Chicken Breast–You absolutely can and it is deeeelicious! I followed the pan searing directions for the chicken but after removing them, I set them aside until 25 minutes into cooking the rice portion in the oven. After 25 minutes I added the chicken breast on top and continued cooking it for another 25 minutes. I made it for my neighbors in need, but also made it for us. We loved it and they did too! Thank you! 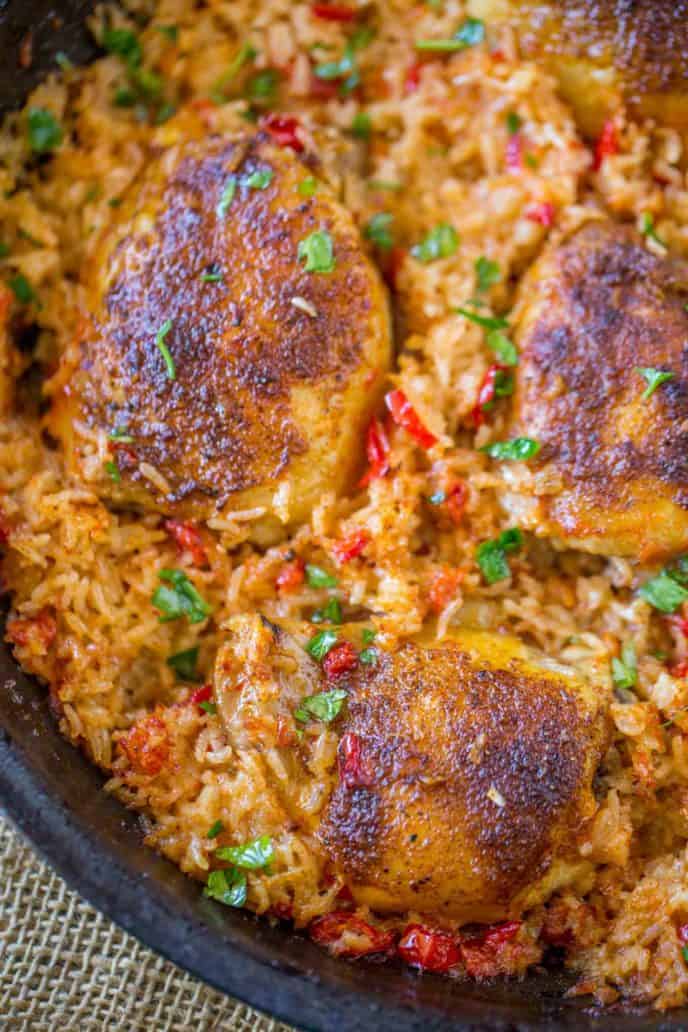 Other versions of this chicken and rice casserole:

Tools Used in the making of this One Pot Mexican Chicken and Rice Recipe:
Better Than Bouillon: I almost never buy boxes of broth because I keep the beef, chicken and vegetable version of this Better Than Bouillon.
Cast Iron Skillet: This is my most used pan in my kitchen, heavy, keeps heat well and gives the BEST sear ever. 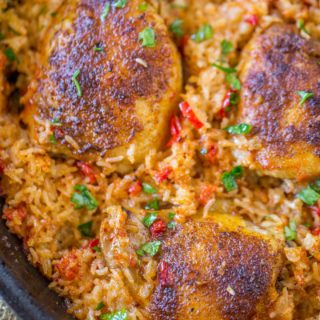 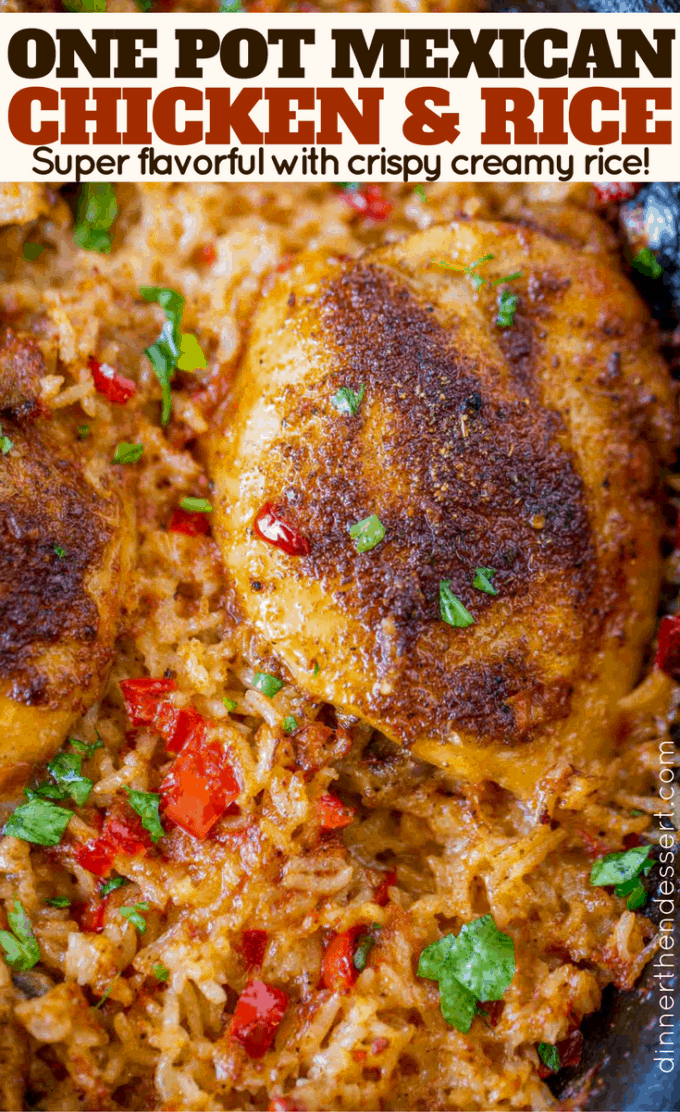