Easy Spinach Quiche is ready to bake in under 15 minutes with this super easy recipe for the fancy sounding Quiche Florentine. 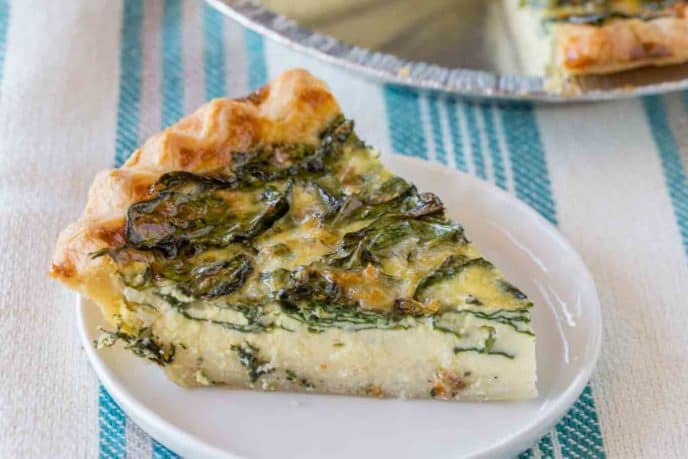 Making this spinach quiche made me almost feel like I was cheating on dessert. See if I buy a pie crust around here it is almost without fail because I’m making my family’s favorite Oreo Chunk Cookie Pie.

So when everyone woke up the next day and saw me pulling this quiche out of the oven I actually had to defend this recipe!

As a general rule I’m more of a savory over sweet person, but pies are dangerous in our house. So when I decided to go savory this time with a quick spinach quiche for a nice weekend breakfast I sort of expected it would just be me eating it.

So how did that turn out? My husband ate three slices (cue me, watching in shock as it happened) and the kids stabbed bacon pieces into their slices before eating them.

If I can cook something we’ll all eat (even with bacon shards poking out in all directions), thats a home run recipe.

That’s what this spinach quiche (quiche florentine) is. It’s a home run because it takes one bowl and literally 5 minutes to mix together. I had the pie sitting on a tray, waiting to go into the oven for almost 10 minutes because I was just waiting for the preheat to finish!

Why use whole leaf spinach in the quiche?

I use whole leaf because I find using the frozen and shredded variety can become gritty or it can cause the egg custard to not be as smooth as if I use the fresh leaves. 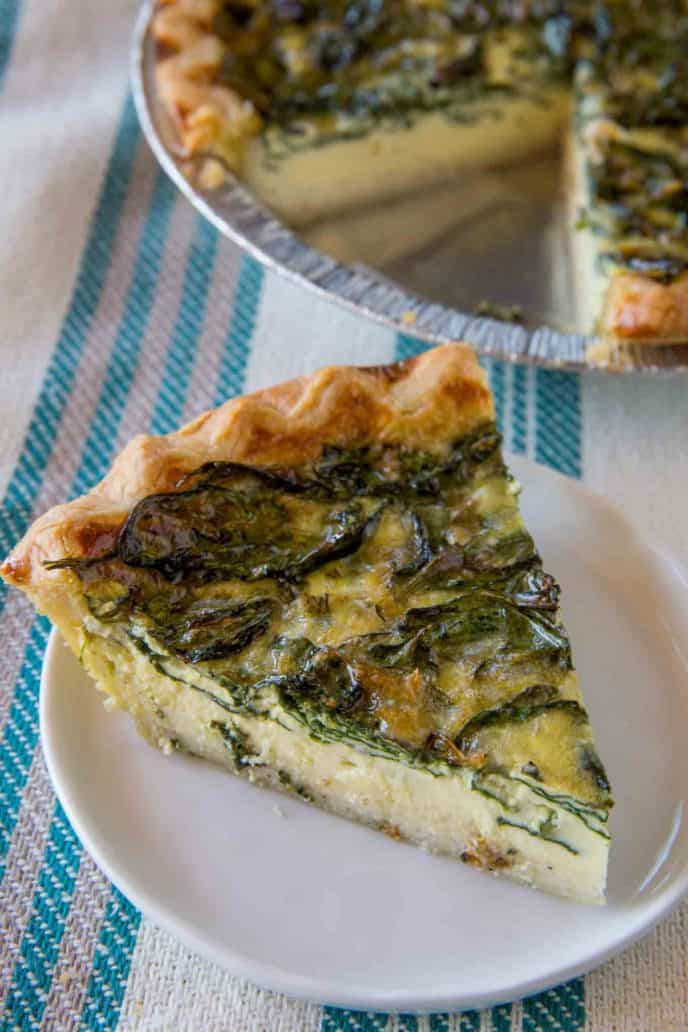 You’re probably wondering why I used a premade pie crust? Well to be honest, one of my least favorite recipes is pie crust. Don’t get me wrong, it is easy enough and I make it in the food processor. But… I NEVER enjoy it as much as I do when I buy these organic pie shells at the store.

Plus, it has a built in cooking vessel and I can just toss it out when we’re done.

If you want to make this into a crustless spinach quiche just triple the spinach and chop it up first. This recipe works well as is with the pie shell supporting it, but without the crust you need a bit more bulk throughout the pie.

Why use so much less spinach than most recipes?

Most recipes for spinach quiche look like all spinach all the way through. This quiche allows for the filling to stay creamy and rich and follows the patterns of Thomas Keller who makes a spinach quiche at Bouchon restaurant that also has less spinach in it. 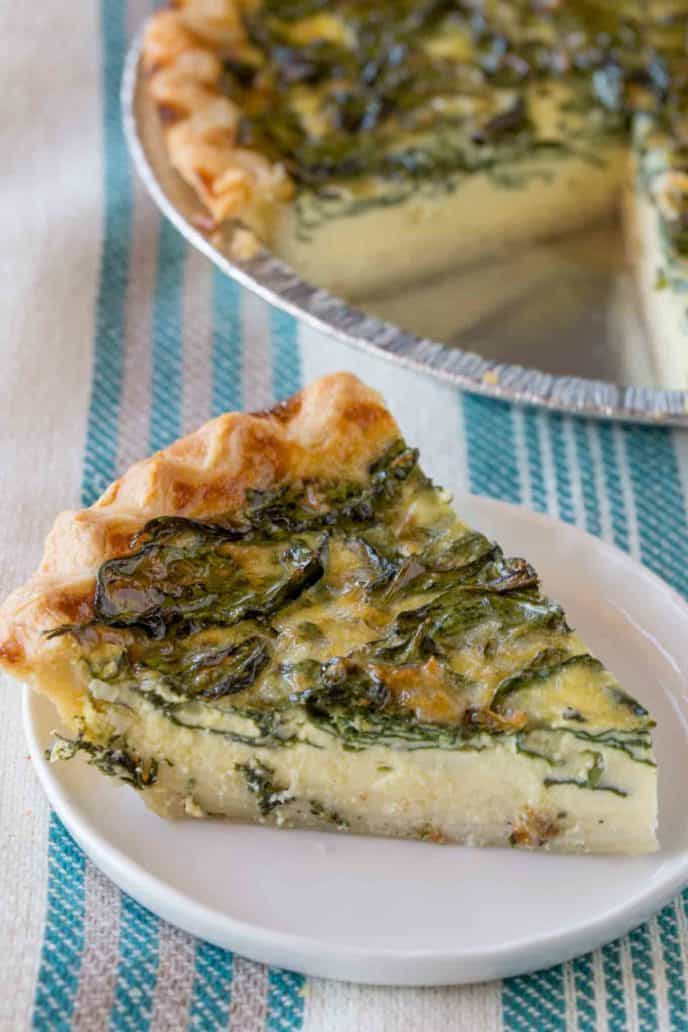 Can you freeze the quiche before baking?

Absolutely! If you want to freeze it, just freeze it on a cookie sheet as flat as possible. Once frozen put it in a plastic bag that you remove as much air from as you can. To bake, cover with foil and bake for 1 hour at 375 degrees. Then uncover and cook and additional 10 minutes.

I actually also sometimes freeze this quiche after cooking, in slices. Then when I want to heat it for serving it for myself I put it in the toaster oven for 5-7 minutes on a medium high heat and it comes out crispy and creamy.

What do you serve quiche with:

I used jack cheese because I wanted something neutral but not quite as flavorless as mozzarella for the kids to enjoy. I would also make this with cheddar or provolone or perhaps even a Swiss cheese to mix things up.

I’ve made this with a mixture of mozzarella (for texture) and red leicester (my favorite cheese in the whole world) before and it was out of this world fantastic. The red leicester is crumblier than mozzarella so I added the mozzarella for the creaminess of the quiche.

Sometimes I also like to both grate the cheese and include it in larger chunks that way most of it sort of melts into the mixture but you also end up with nice pocket of cheese in the quiche too. 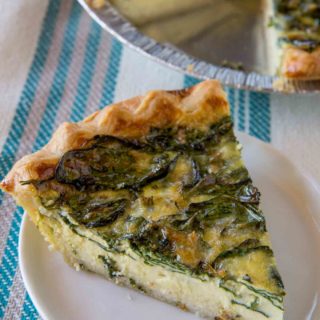 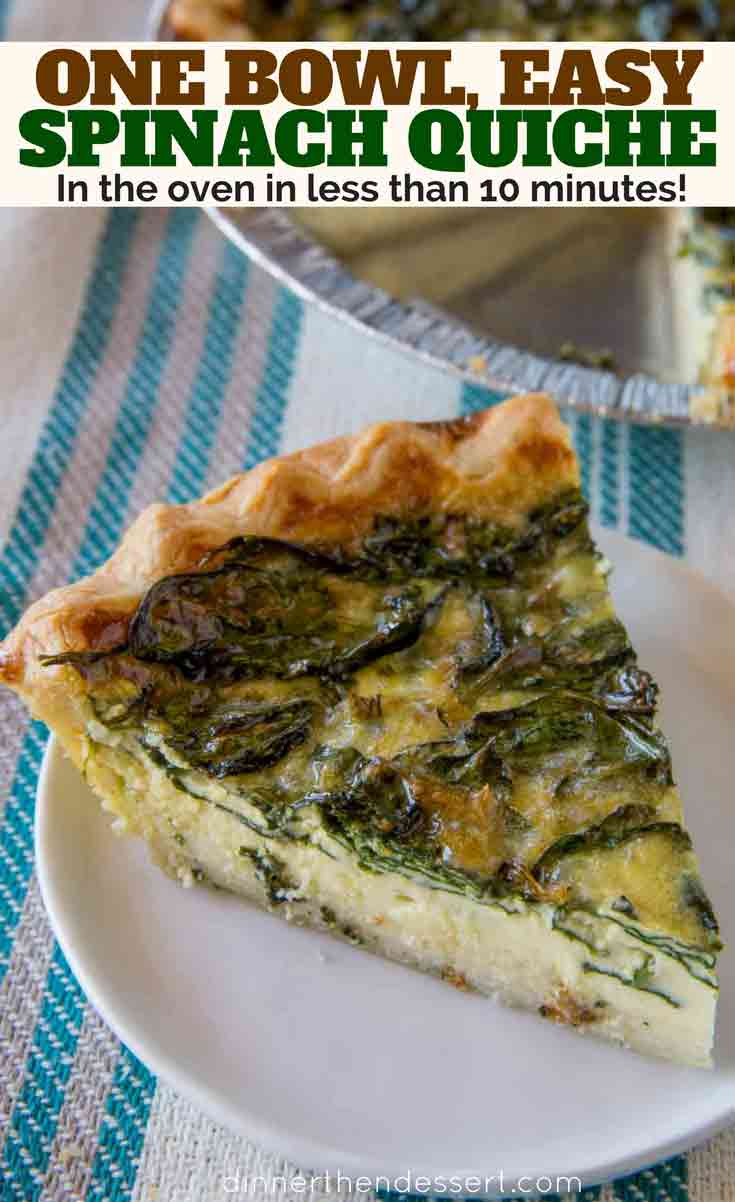