You may have tried some of our other banana desserts, like our Easy Banana Bread (No Mixer!), Banana Cream Pie or our Chocolate Banana Bread, but I promise you’ve never tried a pie like this.

You like bananas, you like toffee, but have you had banoffee pie? The name is literally a mix of the words “banana” and “toffee,” and you will kick yourself for not trying it sooner. This is a no-bake pie that you will want to make again and again because of how easy it is.

Invented was in the 1970s, it has become very popular in a short amount of time. For people who want the natural sugar of a banana with the smooth richness of dulce de leche, this is an absolute must-try and you shouldn’t be intimidated by the layers, they’re all easy to make!

We adapted the original recipe into an easier to make, no less delicious version that you can throw together in a pinch. The great thing about this recipe is that the whole thing only takes as long as the mixtures needs to cool, so you can whip up a gourmet, delicious dessert any night of the week.

HOW TO MAKE BANOFFEE PIE

How to make Homemade Dulce de Leche from Condensed Milk:

WHERE DID IT COME FROM?

Banoffee pie is a British invention. It was created fairly recently by Nigel Mackenzie and Ian Dowding at a place called The Hungry Monk in East Sussex, England. In 1971, Mackenzie and Dowding were trying to make an American toffee pie recipe that just wasn’t working so they substituted in some bananas and made a crust from biscuit crumbs. Voila! A new pie was born. It became a hit around the world, had a short cameo in the film “Love Actually,” and was apparently Margaret Thatcher’s favorite recipe to bake, according to Wikipedia.

I may secretly love this pie even more because it was in Love Actually. I can’t put words to how much that I love that movie, haha.

HOW LONG WILL IT KEEP? 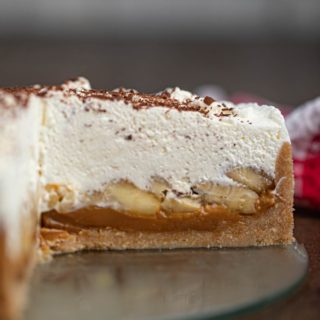