Slow Cooker Ham and Potato Soup is creamy, full of veggies and ham, finished off with milk and sour cream for an easy, delicious hearty soup.

Slow Cooker Recipes make busy fall and winter schedules so much easier. Coming home on a cold day to a big batch of Slow Cooker Vegetable Beef Soup or Slow Cooker Taco Soup will warm you up in an instant. 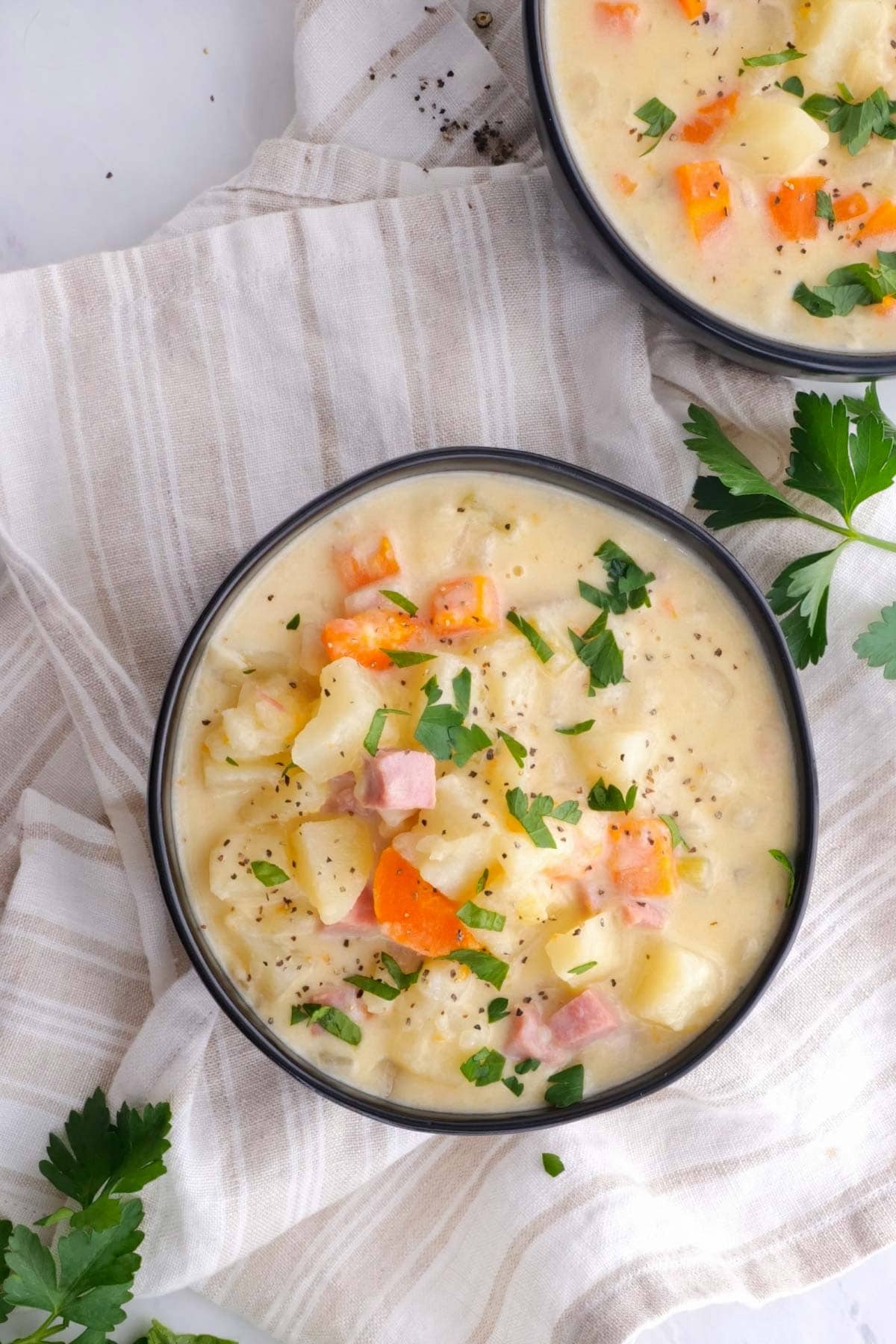 Slow Cooker Ham and Potato Soup is a delicious set it and forget it meal your family will enjoy that tastes like you stood by the stovetop tending to it for hours. 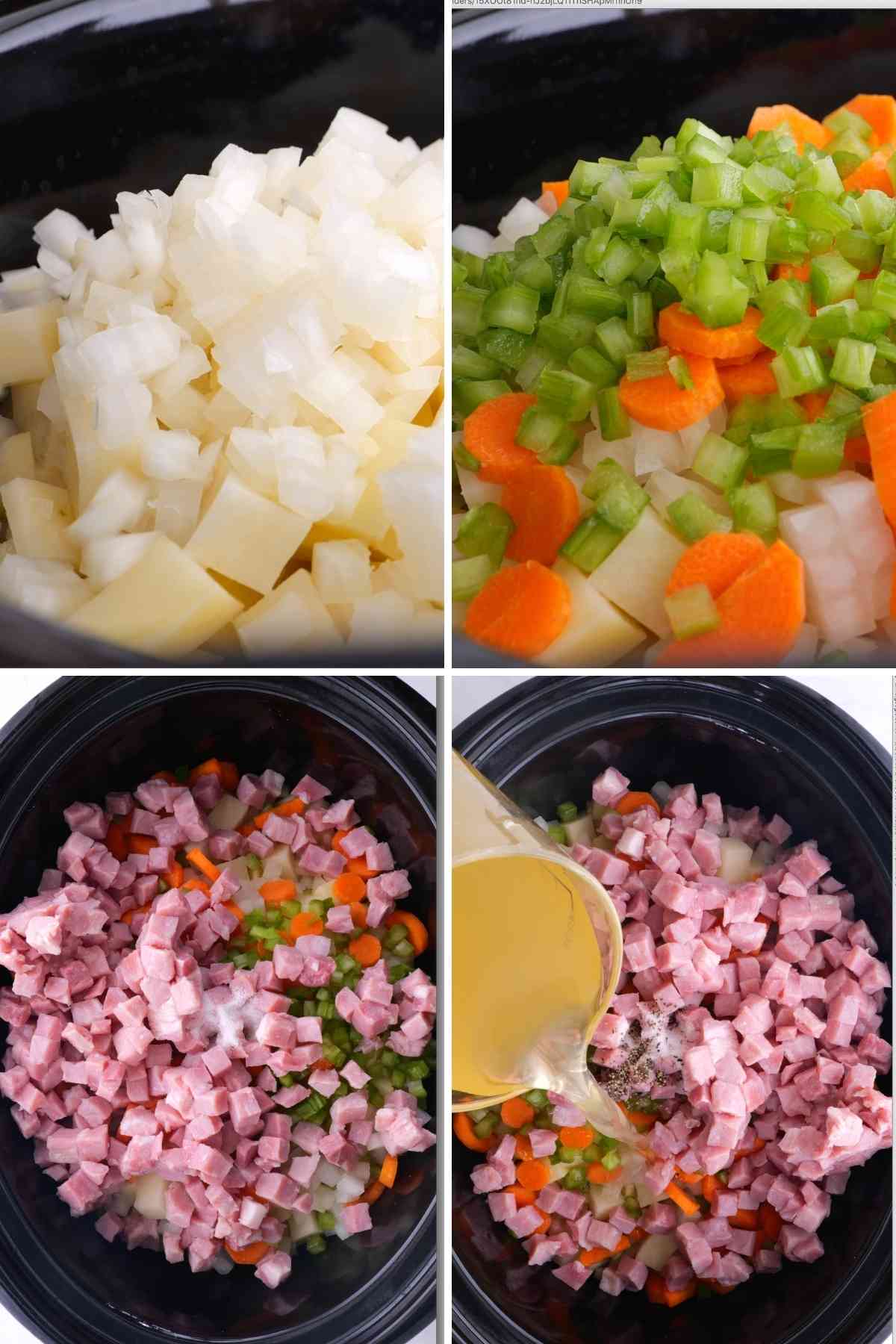 Soups are a big part of the fall season, with their instant “warm you up” abilities and ability to freeze portions or take portions for quickly heated lunches. Slow cookers are such a great tool for making easy soups in the winter, especially this Slow Cooker Ham and Potato Soup.

Serve Slow Cooker Ham and Potato soup as a main dish with Easy Dinner Rolls or Black Pepper Bacon Biscuits that incidentally would go fabulously with this soup! 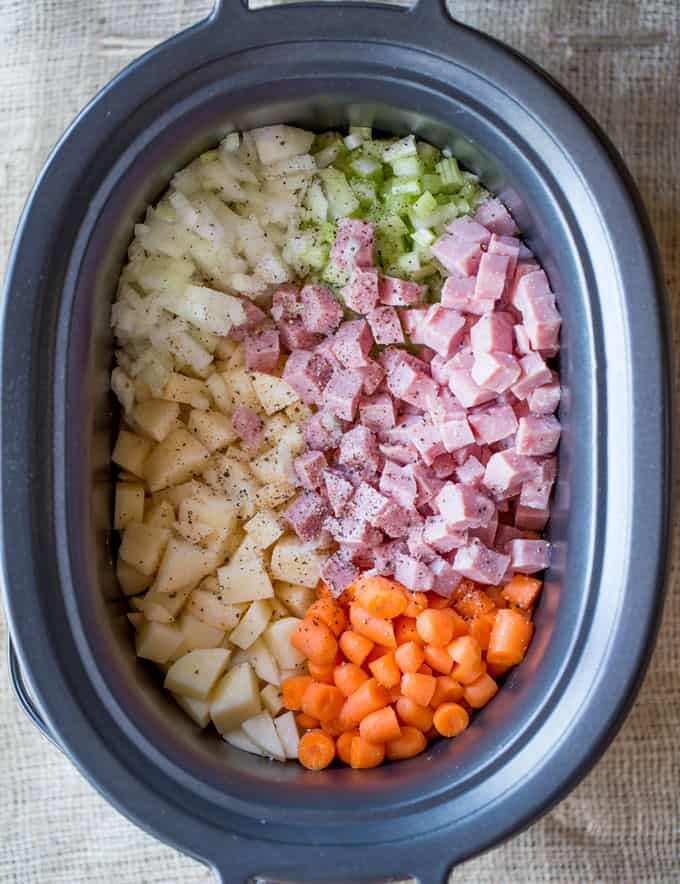 With less than 20 minutes of prep work your slow cooker is set and ready to go.

The Slow Cooker Ham and Potato Soup simmers away on its own, melting the vegetables into this delicious creamy base. A quick mash, a bit of heavy cream and sour cream and dinner is served!

The best part of slow cooker meals like this Slow Cooker Ham and Potato Soup is that they’re perfect for weeknights now that everyone is back to school or for those hearty meals you’re going to need after a day spent out at the soccer fields watching the little ones run around in a pattern that almost resembles soccer.

This Slow Cooker Ham and Potato Soup can be ready, waiting for you to come home, peel off the grass covered uniforms and eat! 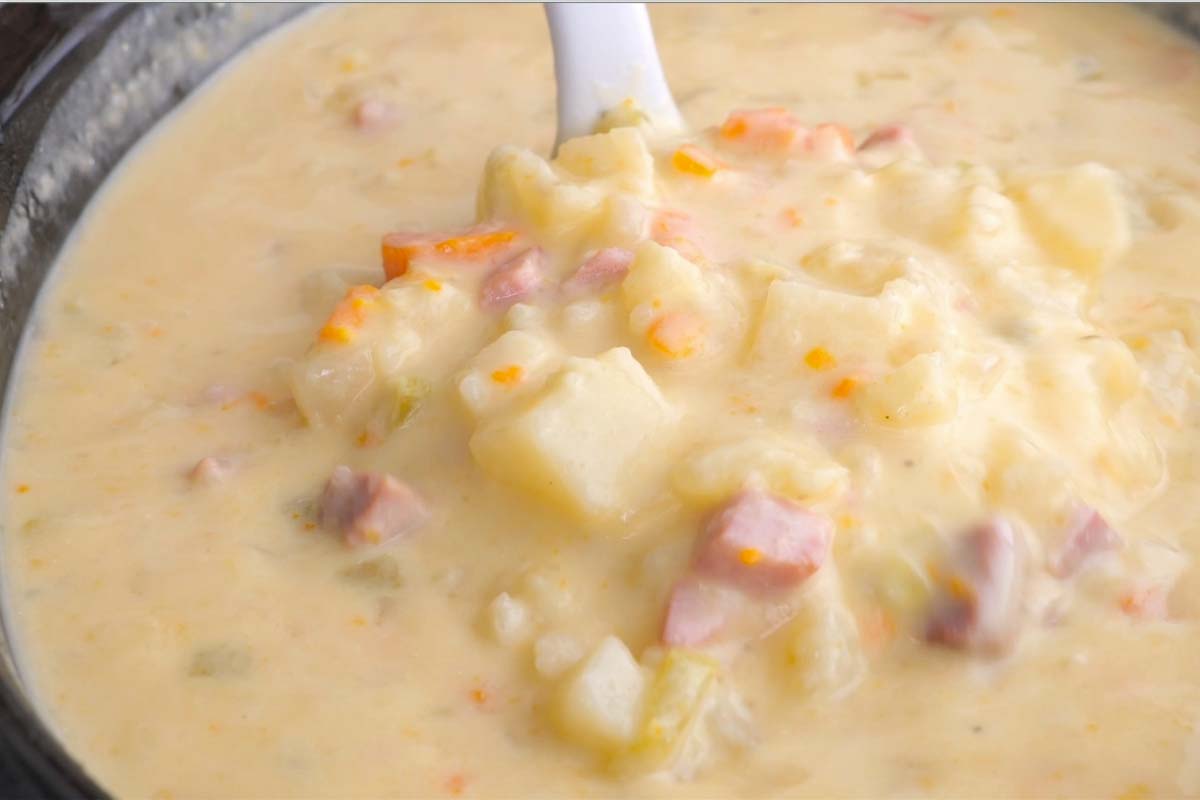 Tools Used in the making of this Slow Cooker Ham and Potato Soup:
Slow Cooker: This recipe was made in this slow cooker. For larger roasts you can also brown the meat in the insert and not lose a bunch of the flavor by transferring the meat and leaving the browned bits behind. If you’re thinking of a new slow cooker, consider it if your budget is open.
Better Than Bouillon: You’ll never need to buy boxes of broth if you keep on hand the beef, chicken and vegetable version of this Better Than Bouillon.
Spice Rack – If you buy spices in bulk from local grocers or from Penzey’s, it’s less expensive and significantly higher quality than buying the jars individually. This spice rack helps to keep from ending up being left with tons of little bags of spices. 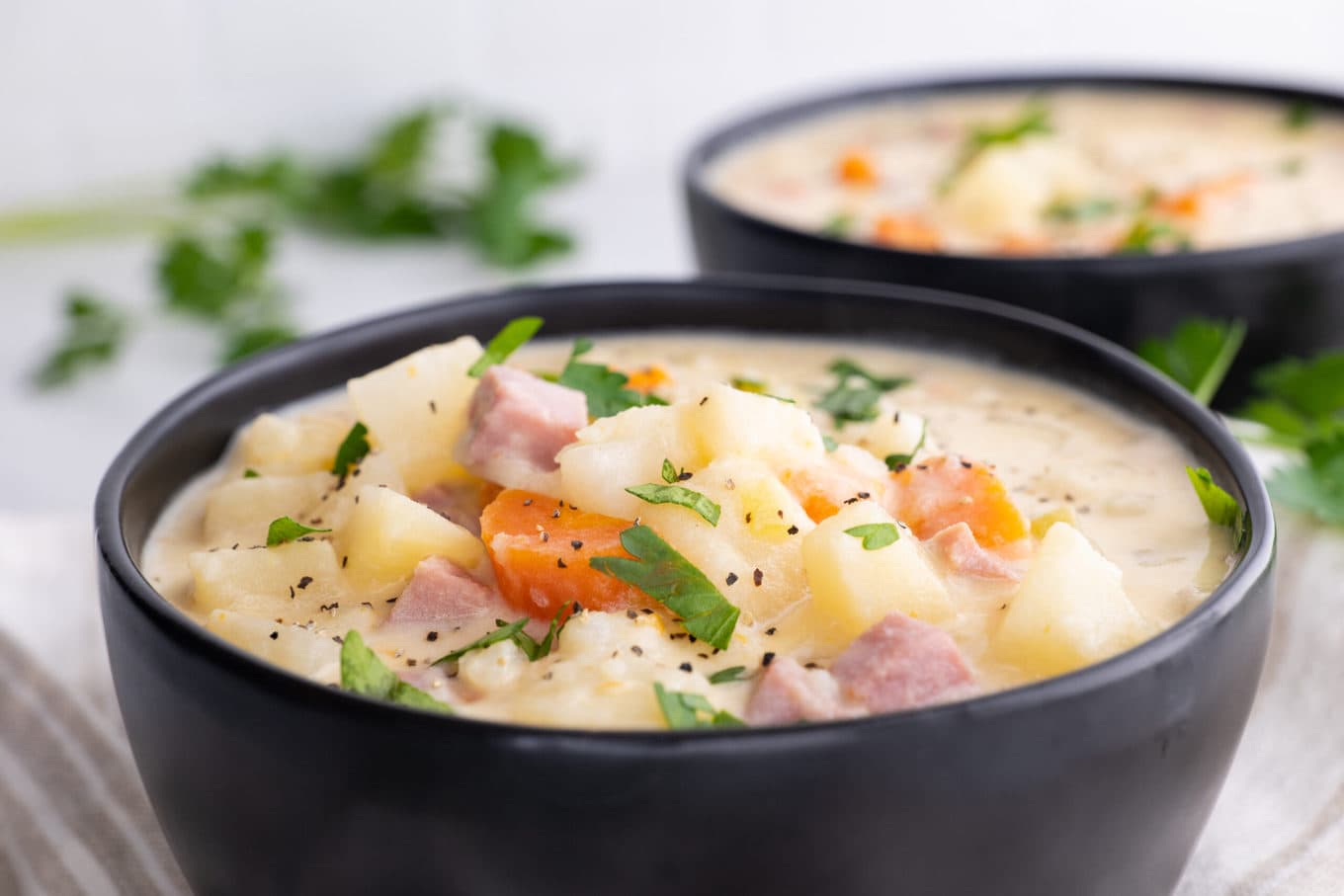 HOW TO STORE SLOW COOKER HAM AND POTATO SOUP 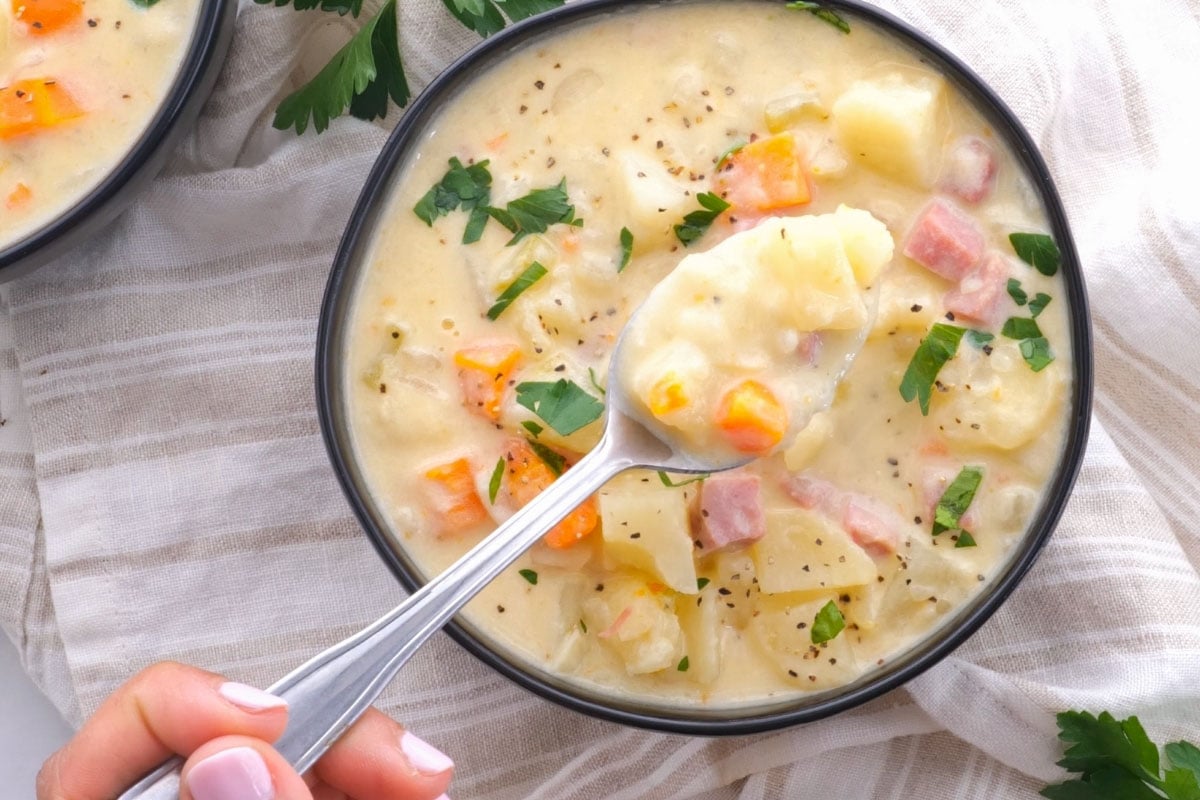 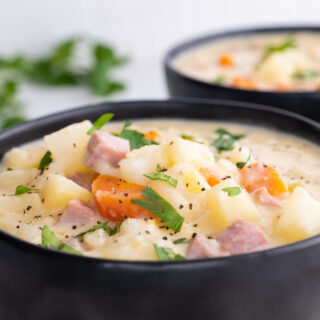