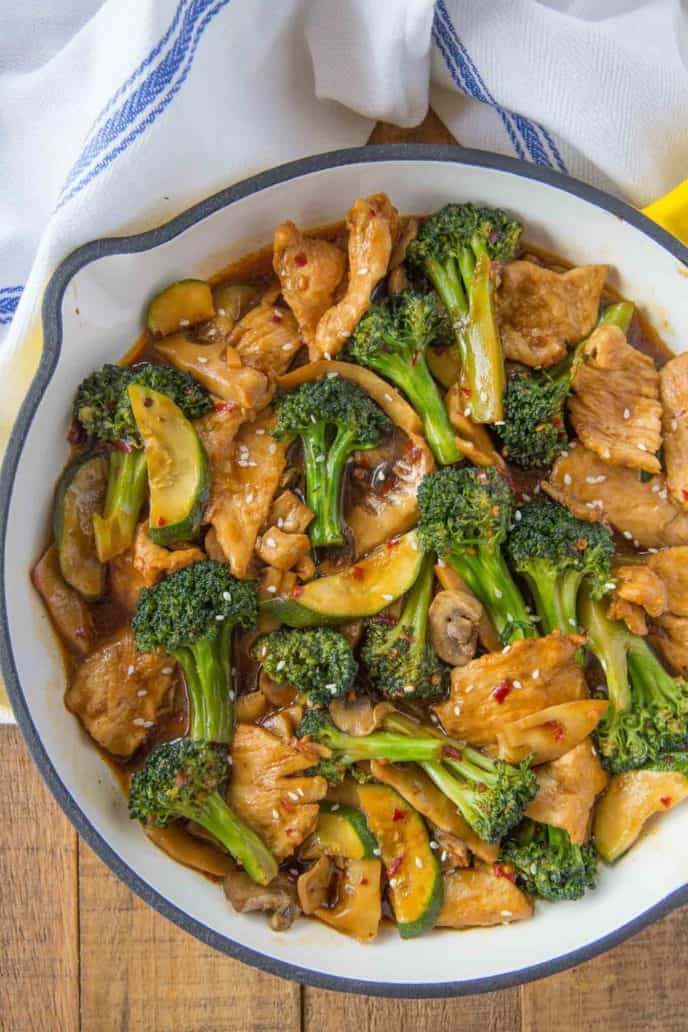 When you tell someone you are going to make Hunan Chicken you may get a confused look. Most people are not familiar with the name of the dish, but if they were to eat it they’d recognize the flavors immediately. This is your classic Chinese Chicken Stir-Fry dish. And it’s done in less than 30 minutes.

We use chicken breast in this dish because it cooks so quickly that the chicken stays tender. I don’t generally use white meat in Chinese food recipes with the exception of noodles or stir-fries. Anything battered and fried is always dark meat chicken unless you’re making Sweet and Sour Chicken which has long been seen as the “healthy” version of Chinese fried chicken recipes.

How to cut chicken thinly:

One of the traditional takeout things about chicken stir fries is how they have chicken that looks like it was almost shaved, similar to Mongolian Beef in restaurants. The trick to this is to freeze the chicken for about one hour. Once you do you can very easily slice the chicken very thinly against the grain. Since the slices are so thin you’ll find that even though it was in the freezer, it will come back to a good cooking temperature very quickly.

What is in Chinese Hunan Sauce:

Hunan sauce is made of rice wine vinegar, sugar, chili paste and an oyster and soy sauce based sauce that is made in just minutes. Chicken broth adds some bulk to the sauce and cornstarch helps to thicken the mixture quickly. 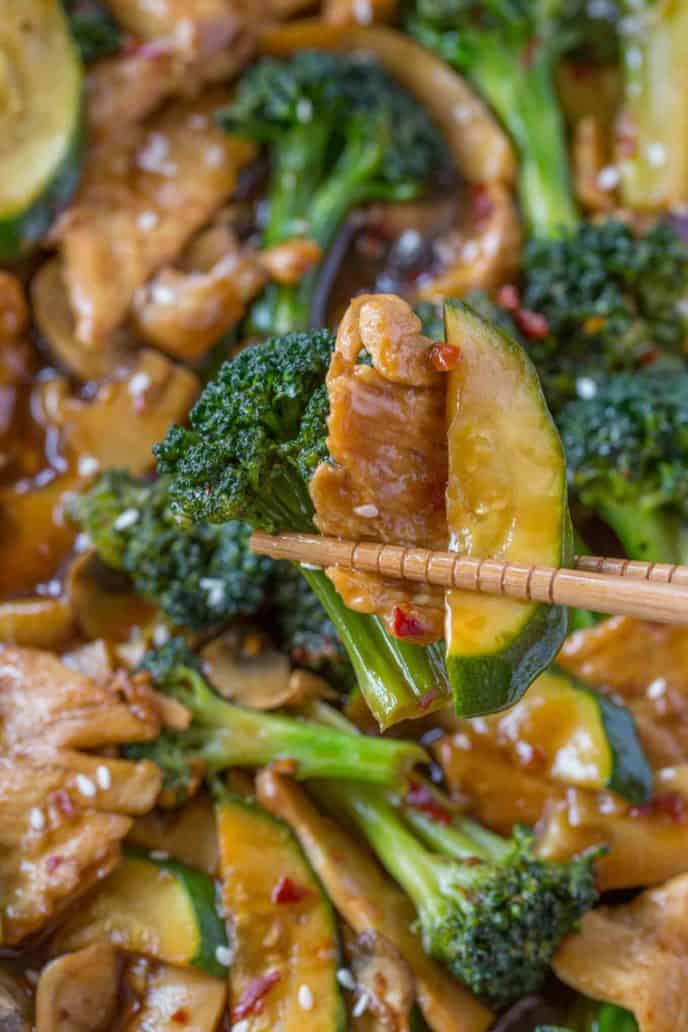 Hunan Chicken, while popular, is sometimes just categorized as a Chinese Chicken Stir Fry as the sauce is very similar to most peoples classic stir fries. Because of that it often gets overlooked for more popular items on a Chinese restaurant’s menu. Let’s examine the two other recipes it most often gets mistaken for:

Hunan chicken is a stir-fried dish that is just coated in a dusting of cornstarch with a spicy chili paste sauce coating a mixture of vegetables. Szechuan Chicken is generally battered and fried before being added to a pan of stir fried vegetables and coated in a much sweeter sauce than Hunan chicken.

Hunan chicken is a stir fried dish with vegetables and a much lighter sauce that is spicy and made with oyster sauce. General Tso’s Chicken is a delicious but battered and fried dish similar to orange chicken with is tossed in a very sweet but slightly spicy sauce, normally with no vegetables. 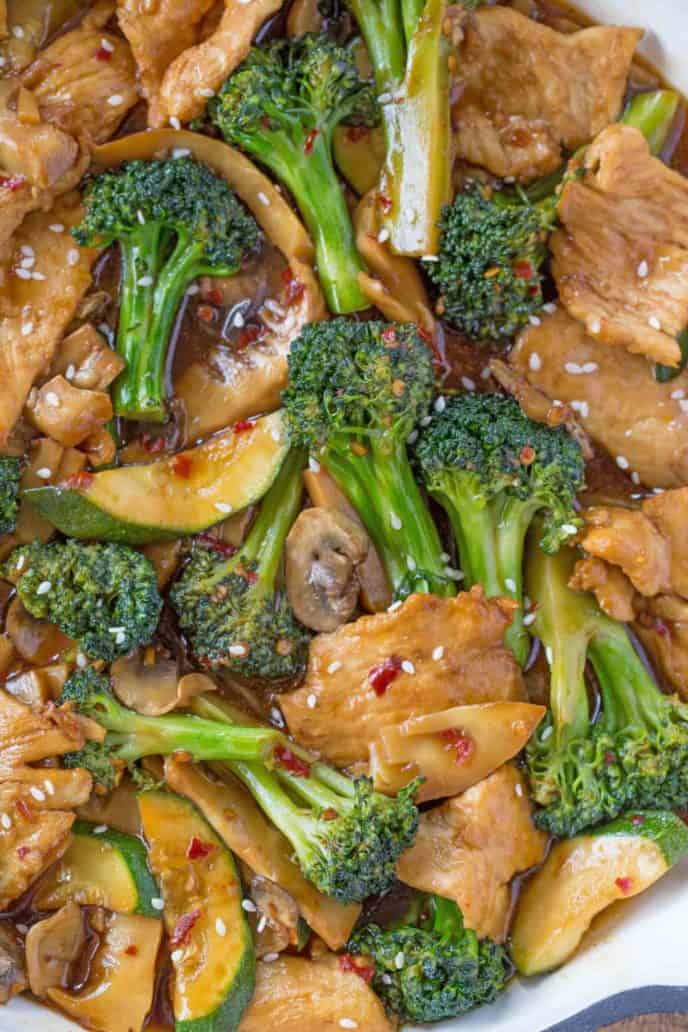 Many people think of easy stir-fries and even buy “stir fry” sauces that are pre-made. When I had clients who would ask for a chicken stir fry this Hunan Chicken Recipe is the one I would use. You can adjust the heat more or less to your tastes by the amount of chili paste you add to the dish, but the mixture of broth, soy sauce, garlic, ginger, rice wine vinegar and a touch a sugar are the classic ingredients in a Chinese stir fry.

The stir-fry sauce is so versatile it can be used with chicken, beef, pork, tofu, shrimp, scallops and most fish including salmon, and sea bass. You can make the sauce in larger quantities and freeze in portions as well. Ice cube trays are a great option, 6 standard cubes is plenty for a recipe and the garlic and ginger can be added to the sauce mixture to make cooking even easier when you’re ready for the sauce. 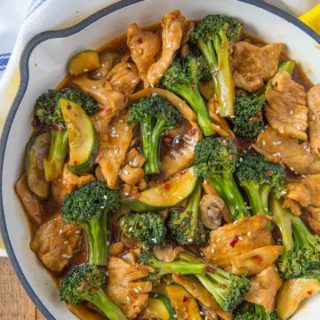 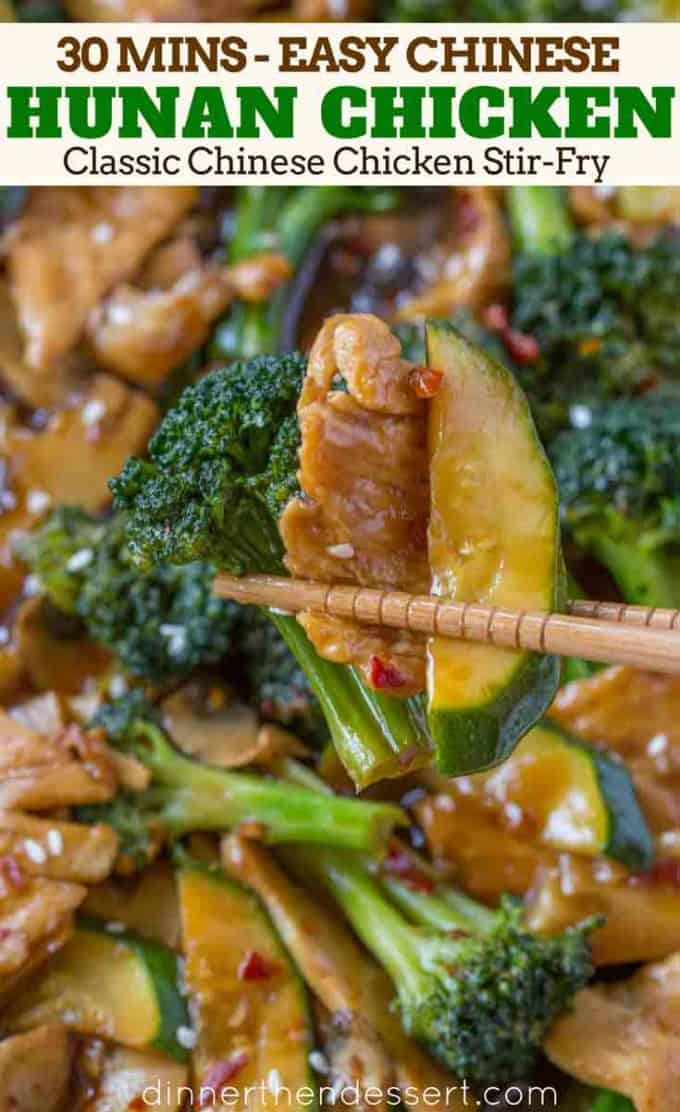