Sheet Cake desserts are a fun and easy way to make desserts to serve for a crowd and even easier to decorate! We’ve topped this one with Easy Whipped Cream but you could easily use Cool Whip too! 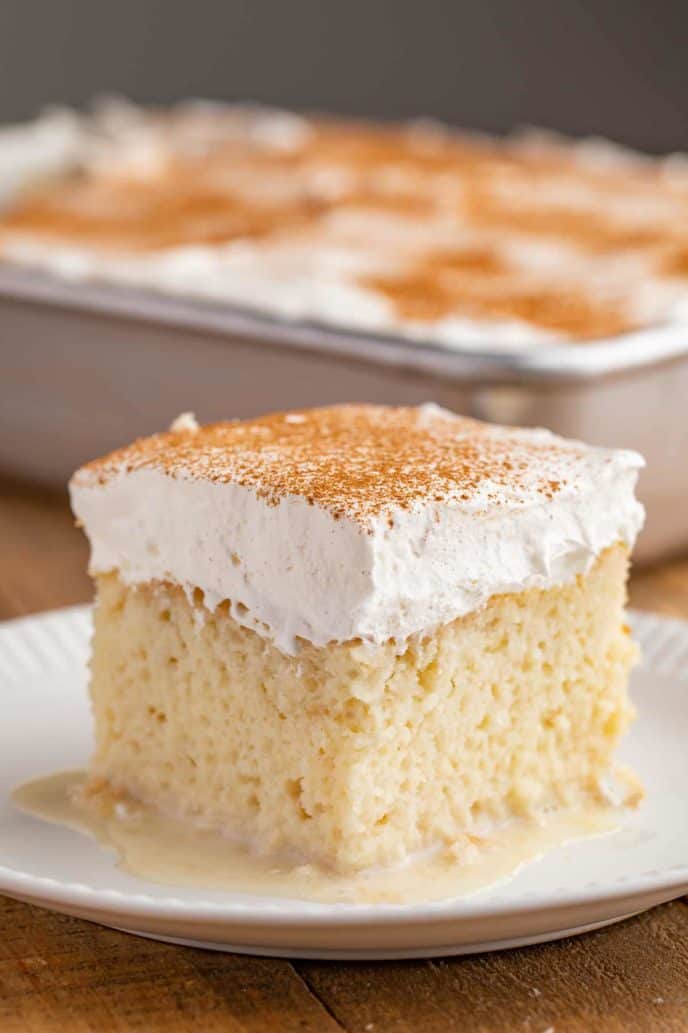 Tres Leches Cake isn’t your regular sheet cake. It isn’t even close. It’s like your classic Easy Vanilla Cake recipe/sponge cake (this is my favorite cake) that’s been taken up about 5 notches because you add condensed milk, evaporated milk, heavy cream, whipped cream, cinnamon and extra eggs for richness. Did I mention a cup of sugar to round things out? We don’t hold back in this recipe. Next time I’ll share an Angel Food Cake recipe with you all to even things out.

Tres Leches Cake translated literally means “three milks” because the cake itself is soaked with three types of milk: Condensed milk, evaporated milk and heavy whipping cream (some people prefer to use whole milk here, coconut milk or even half and half).

This Tres Leches Cake also happens to be extra light while having all these rich flavors because we are using a sponge cake as the base of the cake. A sponge cake is a cake that is made by separating the eggs and beating the egg whites to create a lighter batter. This helps to give the batter extra lift.

Make sure you use a nice high walled cake pan for this recipe, we are adding a lot of ingredients to this cake batter and to the cream topping! We don’t want to lose any of the deliciousness along the way.

Because we are beating the egg whites and the butter/sugar mixture I highly recommend using an electric mixer for this recipe. Trying to make it with a whisk and a bowl will result in a sore arm and you will probably not get the airy mixture we need for the cake.

And this recipe is much more authentic than my Sopapilla Cheesecake Bars, but I won’t say the cheesecake bars aren’t just as delicious. We actually baked these on the same day and they both were eaten about as fast as each other.

This isn’t diet friendly, but it doesn’t have to be because it is an indulgent once in a while amazing dessert you can serve to guests for a special occasion. Or, you know, a Wednesday after you’ve had a salad for lunch and dinner.

While this cake would be an obvious perfect dessert for Cinco de Mayo, we also love serving the Tres Leches Cake with other fun toppings. On top of the cake you can add toppings like shredded coconut, maraschino cherries, Vanilla Ice Cream, Strawberry Topping, Pineapple Topping or any other fun dessert toppings you love.

How to make Tres Leches Cake: 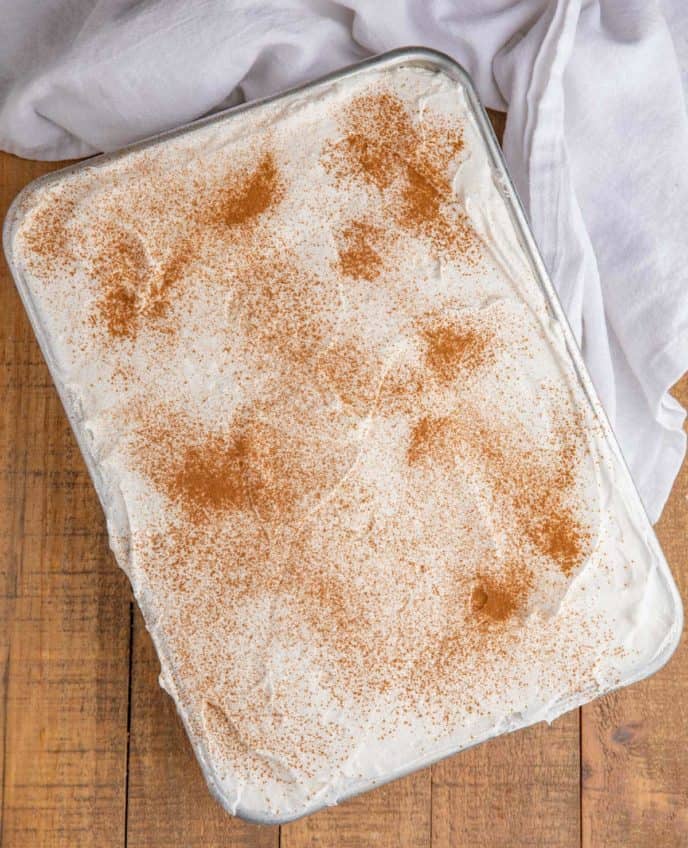 Let’s take a quick minute to understand the differences in the milks you’re going to be using to soak this Tres Leches Cake.

What is condensed milk? Condensed milk is cow’s milk that has had about 60% of it’s water removed like evaporated milk, but it has had sugar added to create a syrupy texture to the milk. Condensed milk is often used to flavor desserts and make caramels, sauces and when cooked properly it can also be turned into and easy dulche de leche.

If you are shopping in the store and you see cans that say “sweetened condensed milk” or “condensed milk” you can buy either one. They are both the same product. There is no unsweetened version of condensed milk or it would be labeled evaporated milk.

Speaking of evaporated milk, this is a product that is the healthier cousin to condensed milk. It is a cow’s milk that has had 60% of it’s water removed. It contains 6.5% milkfat compared to whole milk which contains 3.5 % milkfat so if you want you can use it in recipes for an added indulgence where you would be using whole milk.

We sometimes like to use evaporated milk in Easy Mashed Potatoes during the holidays to add an extra indulgent kick to the recipe or to our Baked Mac and Cheese for the same reason.

Many people don’t think about the additional uses for evaporated milk, but it is really an unsung hero in your pantry (and less expensive than it’s higher milk fat cousin heavy whipping cream). While I wouldn’t drink it like a glass of milk, you can add it to coffee, or to your recipes in place of milk when needed, so keeping additional cans as a backup is always a good idea (we keep 6 extra cans on hand at all times).

Heavy whipping cream is the king of all dairy when it comes to indulgence. With the highest content of milk fat, second to only butter, it will be doing double duty in this recipe in the milk mixture and as a topping in the form of whipped cream.

Heavy cream is best kept as cold as possible before using, so keep the heavy whipping cream in the refrigerator until just before making your whipped cream. Since it doesn’t have any ingredients to stabilize it, if your cake sits out at room temperature the whipped cream will begin to break down.

If you’d like to have your cake sit out longer you can use Cool Whip or a stabilized Whipped Cream in it’s place. The recipe below includes cream cheese and powdered sugar to add stability, and the added sugar will help to offset the tangy flavors of the cream cheese. The mixture has enough heavy cream in it that the flavors won’t be nearly as thick or as pronounced as a New York Cheesecake. 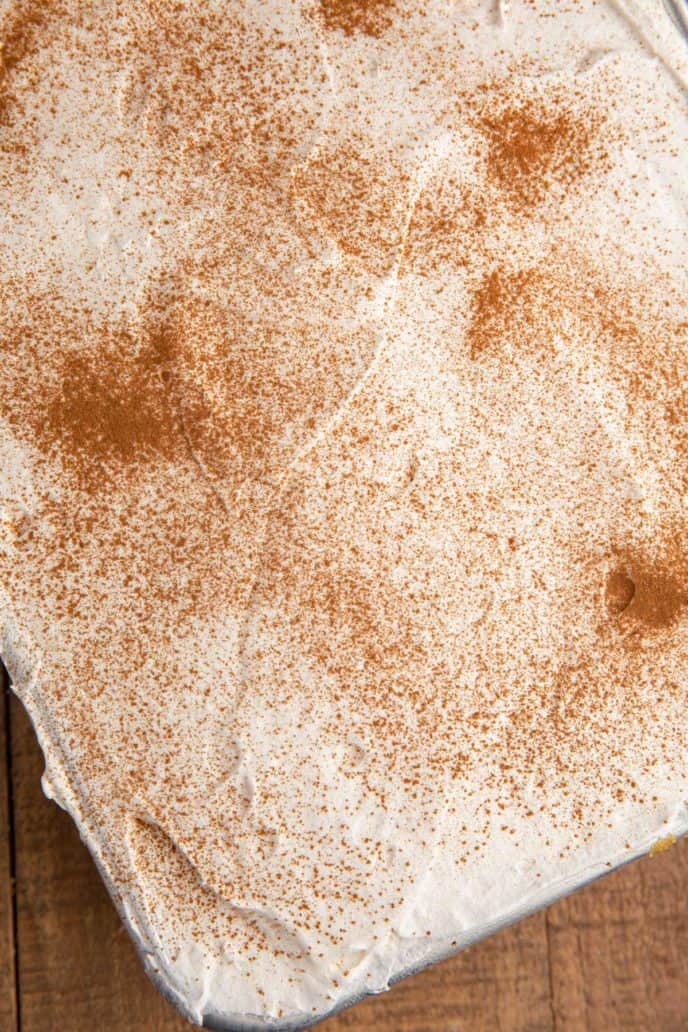 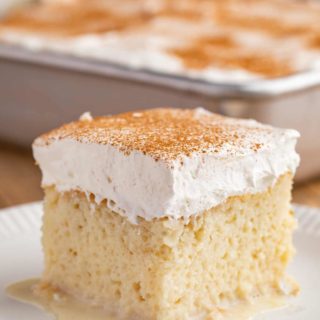