Apple Cinnamon Pork Loin is a savory, sweet, and tender roast made in a slow cooker with apples, pork loin, honey, and cinnamon. Cozy and easy weeknight dinner!

It’s no wonder that Brown Sugar Garlic Pork is one of the most popular Dinner Recipes on this site. Slow-cooked savory pork in a sweet marinade comes out tender and delicious every time.

We’ve said it before, but nothing compares to a juicy roast that you didn’t have to toil over and tend to all day. Coming home to the rich aromas of pork, apple, and honey will have your mouth watering as soon as you open the door.

Apple Cinnamon Pork Loin comes out amazingly tender and full of flavor with simple ingredients and just a little prep work. In less than 20 minutes you can have your pork roast in the crock pot, and within a few hours you will have a juicy main dish ready to eat.

When it comes to serving your pork loin, it goes best with side dishes featuring sweet or regular potatoes. These mild starches won’t overpower the pork and apple honey flavor.

Applesauce has long been the sauce most associated with pork chops and roasts. For this recipe, we made an Apple Cider Gravy with the slow cooker juices instead of the traditional turkey drippings.

This gravy has all the sweetness of applesauce but is also rich with butter and savory flavor. It’s a great addition, especially if you serve your Apple Cinnamon Pork Loin with Mashed Potatoes and Roasted Veggies. For more easy weeknight dinner recipes, check out our catalog of Slow Cooker Recipes.

What is the difference between a Pork Loin and Pork Tenderloin?

Make sure you are buying a pork loin for this recipe, as it will be a wider and flatter cut than the tenderloin. Pork loin comes from the back area of the pig, between the shoulder and rump, and it is a terrific cut for larger roasts and low and slow cooking methods like this Apple Cinnamon Pork Loin recipe. Pork tenderloin is a leaner, narrower cut that is closer to the spine of the pig, and it would be much smaller and end up dried out if used for this recipe.

How to Make Apple Cider Gravy

In a saucepan, over medium heat, melt butter and whisk in flour until thickened. Slowly add juices and cider, whisking well to combine. Salt and pepper to taste. Bring to a low boil and whisk until thickened to your desired consistency. 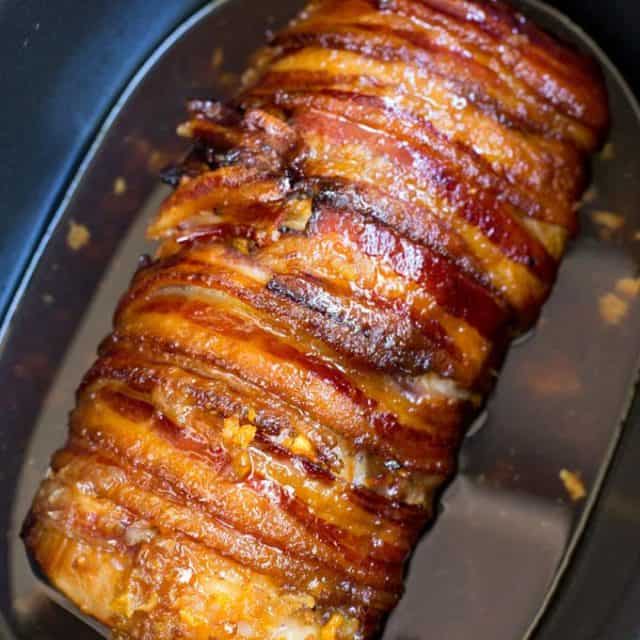 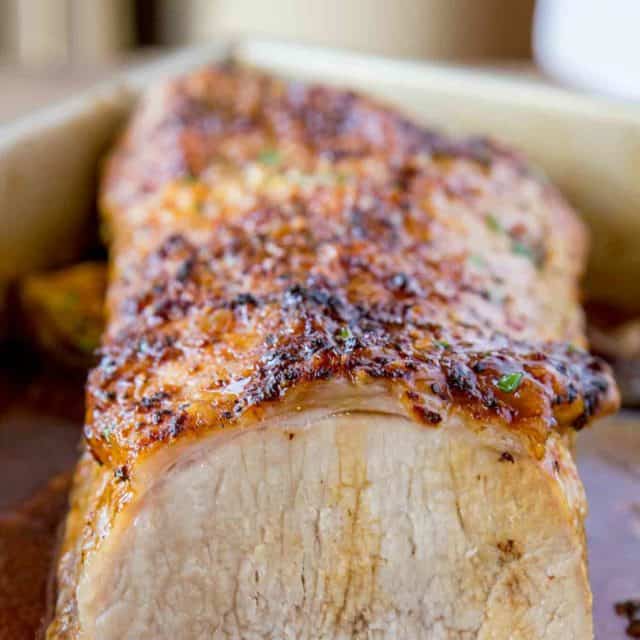 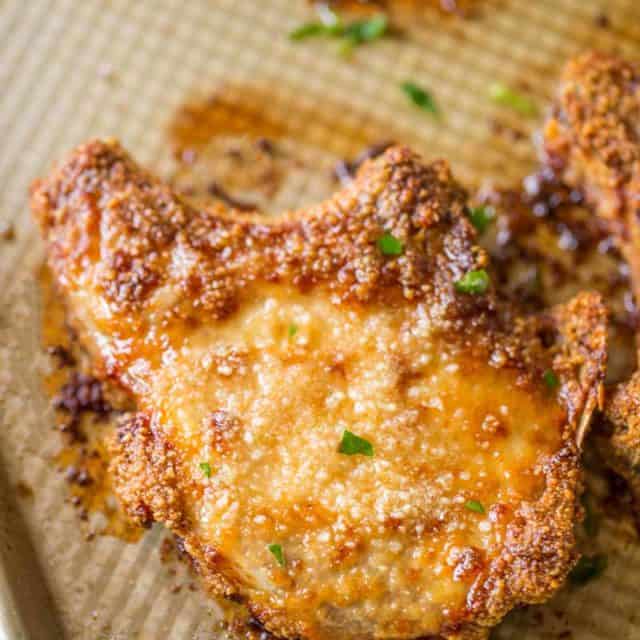 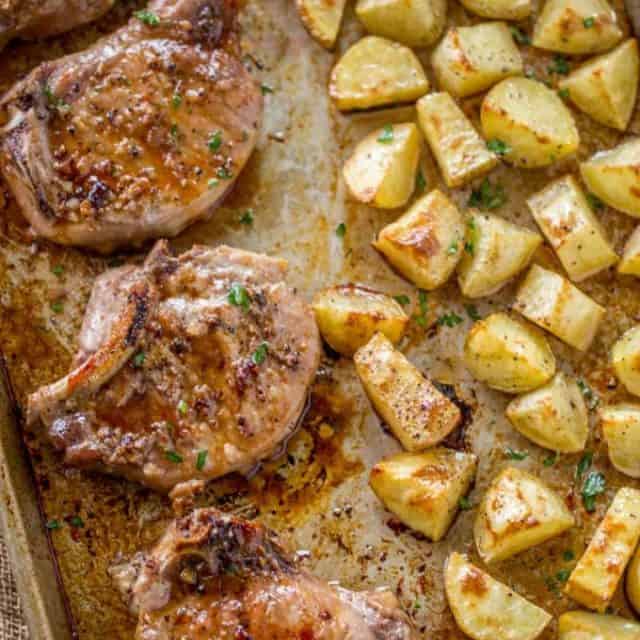 Pork loin is low in fat and high in protein, which makes it a wonderful alternative to other lean meats such as chicken if you are looking for a heathy meal. It also provides essential nutrients such as iron, potassium, vitamin D, vitamin B6, and magnesium.

Why are apples served with pork?

People have been serving pork with apples for centuries, according to food historians. It likely has to do with the autumn harvest being abundant with apples, during the same season in which pigs would be slaughtered to make preserved meats for the winter. The fresher parts of the pig were enjoyed for a harvest feast, and apples were used as a natural sweetener to complement the savory meal. Pork with apples became a natural pairing that is still enjoyed to this day.

How do I know when pork loin is done?

Pork should be cooked to an internal temperature of 145 degrees. The best way to know if your pork is cooked through is using a meat thermometer. It’s ok if the temperature rises above 145 for this slow cooker pork roast recipe, as the meat will continue to tenderize as it slowly cooks.

Do I have to make Apple Cinnamon Pork Loin in a slow cooker?

While this recipe is for the slow cooker, we did include a guide to make your Apple Cinnamon Pork Loin in the oven. Easily turn this into a one pan meal by adding some carrots and potatoes to roast right alongside your pork.
There are also Instant Pot instructions in case you are pressed for time, aka you forgot to put everything in the crockpot before running errands. Who hasn’t been there more than once? This method will save dinner in the event you forgot!

What can I do with leftover pork roast?

If you have leftover honey apple pork, shred it and stir the pork in barbecue sauce to serve on sweet Hawiian rolls with coleslaw for a delicious leftover pork sandwich. You can also dice leftover pork and toss with fresh apple slices and use it to top a delicious winter salad with spinach, walnuts and feta. Or cut a slice of rustic bread and toast it, spread it with any soft cheese like cream cheese, brie or goat cheese, then warm up the leftover pork and apples and spread on top to make a delicious open faced tartine for breakfast. 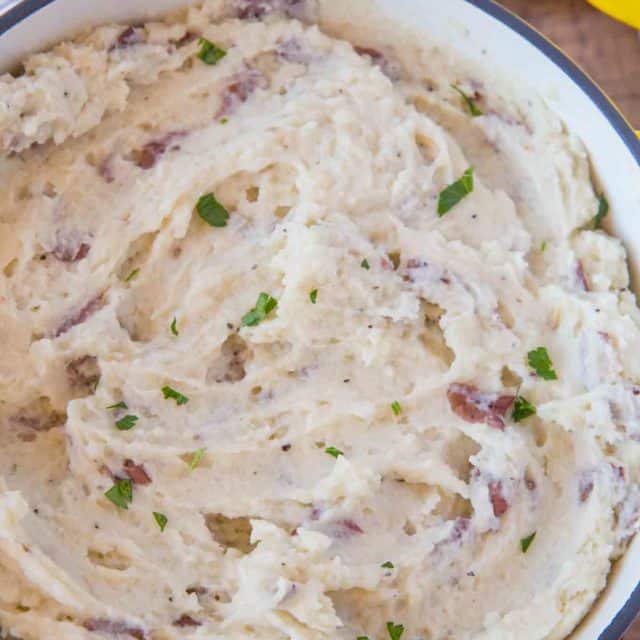 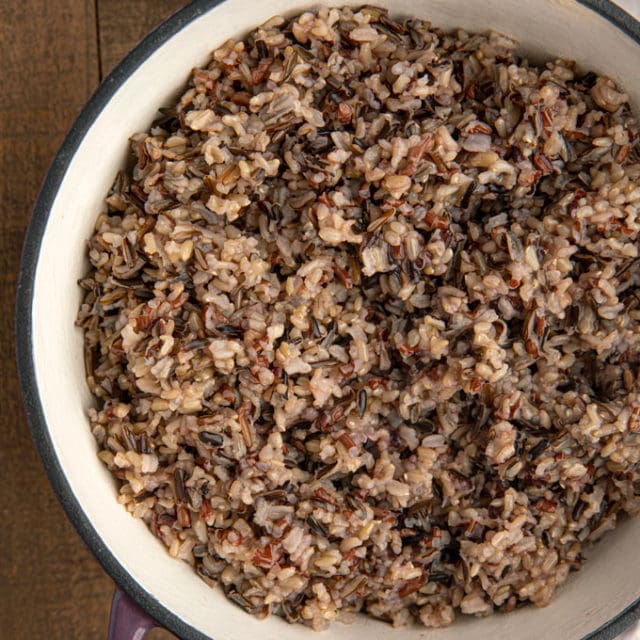 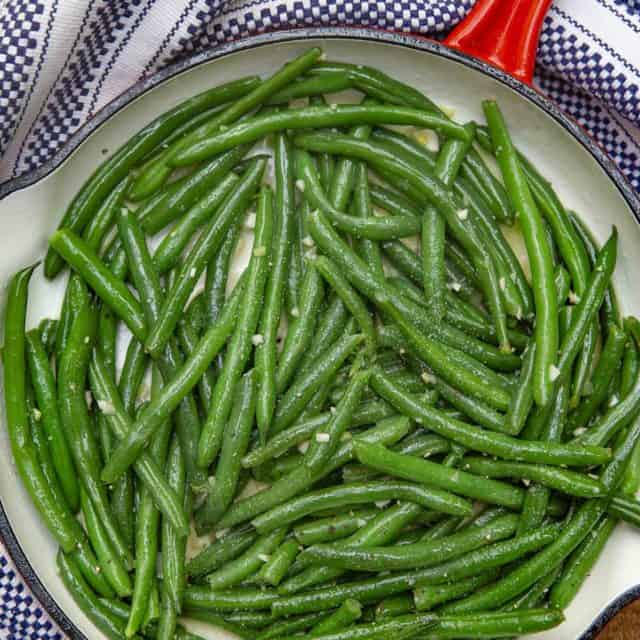 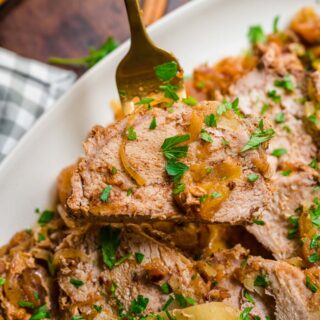