Our classic Easy Cinnamon Rolls are a favorite Breakfast Recipe for the holidays or anytime you want gooey, sweet baked goodness that can double as dessert. 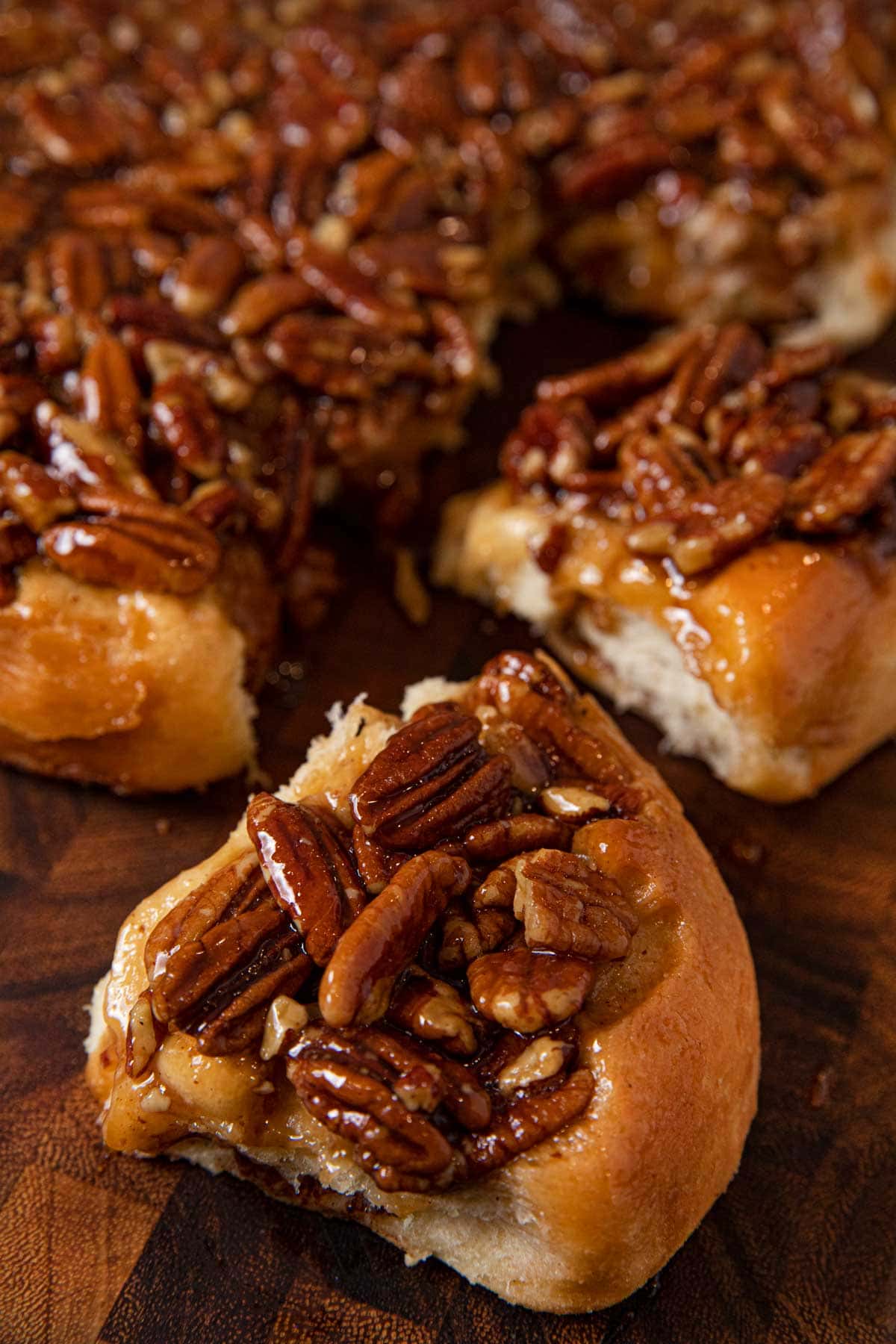 These Caramel Pecan Cinnamon Rolls are a gooey, sticky bun with cinnamon filling smothered with homemade brown sugar caramel sauce and tons of pecans. They are easy to make and ready in just over an hour for an extra special breakfast that wows! Bake Caramel Pecan Cinnamon Rolls for a holiday dessert or brunch treat, or gift a pan of warm sweet buns to friends and family. 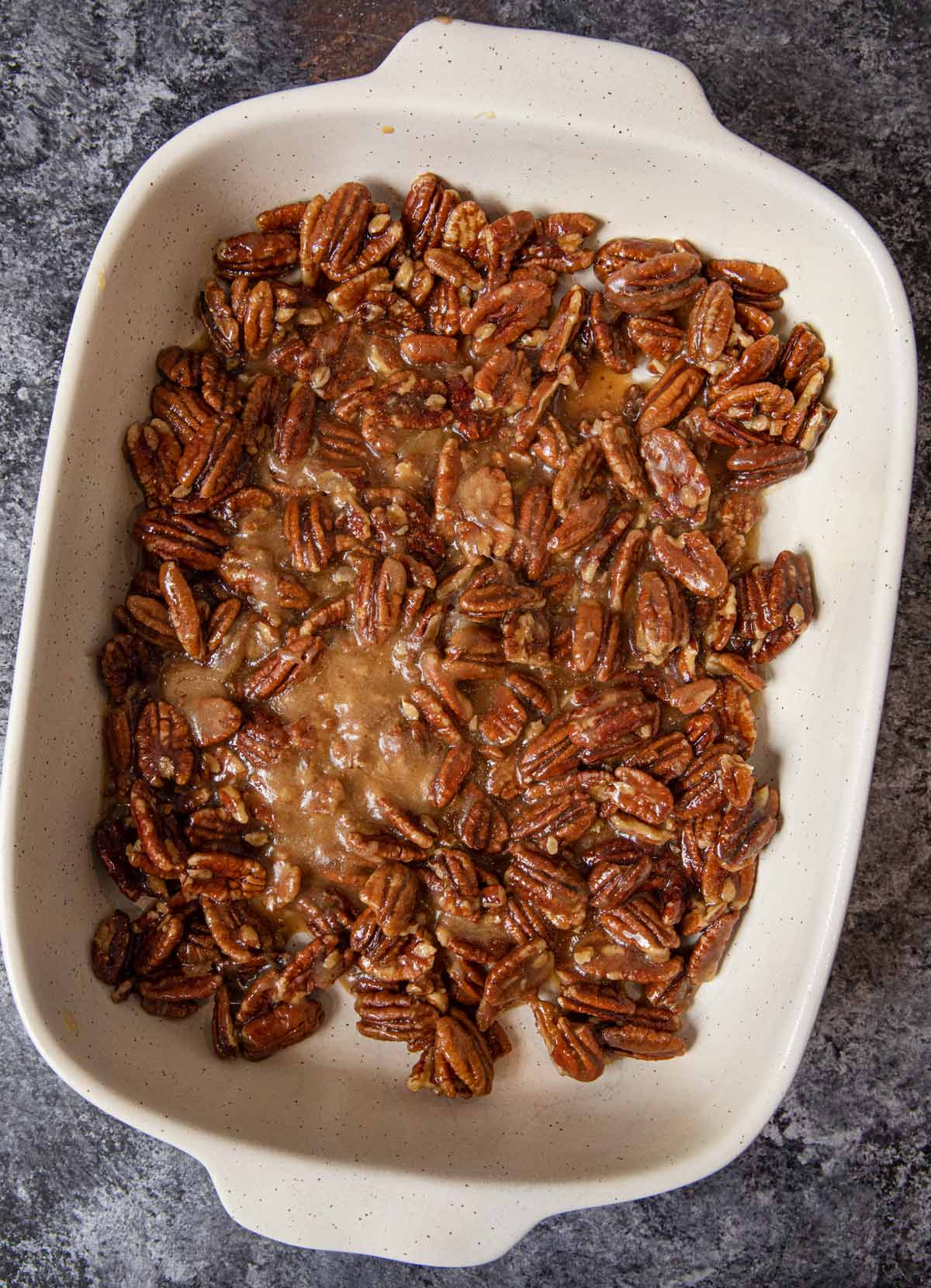 Gooey, delicious Caramel Pecan Cinnamon Rolls are baked a little different than our regular cinnamon roll recipes, with the frosting baking with the rolls on the bottom. They puff up into pillowy soft sweet rolls like normal, then you flip the pan after they are baked and let the sticky caramel topping ooze down the warm buns, similar to Monkey Bread. It’s a sugary, crunchy twist on a favorite bakery treat.

So what’s the difference between a cinnamon roll and a sticky bun? The difference between cinnamon rolls and sticky buns comes down to the frosting. Classic Cinnamon Rolls are smothered with a thick Cream Cheese Frosting after they bake and cool. These Caramel Pecan Sticky Buns have a brown sugar caramel topping that bakes with the rolls and covers them when they are flipped over, which makes them sticky all over – hence sticky bun. Whether you call them Pecan Sticky Buns or Caramel Pecan Cinnamon Rolls, we all call them sweet goodness!

Just because they already have a pecan caramel frosting, doesn’t mean you can’t add even more sweet toppings for dessert! Top these Caramel Pecan Cinnamon Rolls with Vanilla Ice Cream and Salted Caramel Sauce for a decadent sugary dessert. Drizzle the Pecan Caramel Rolls with Chocolate Ganache after they’ve cooled for a chocolatey, caramel bite that’s out of this world! 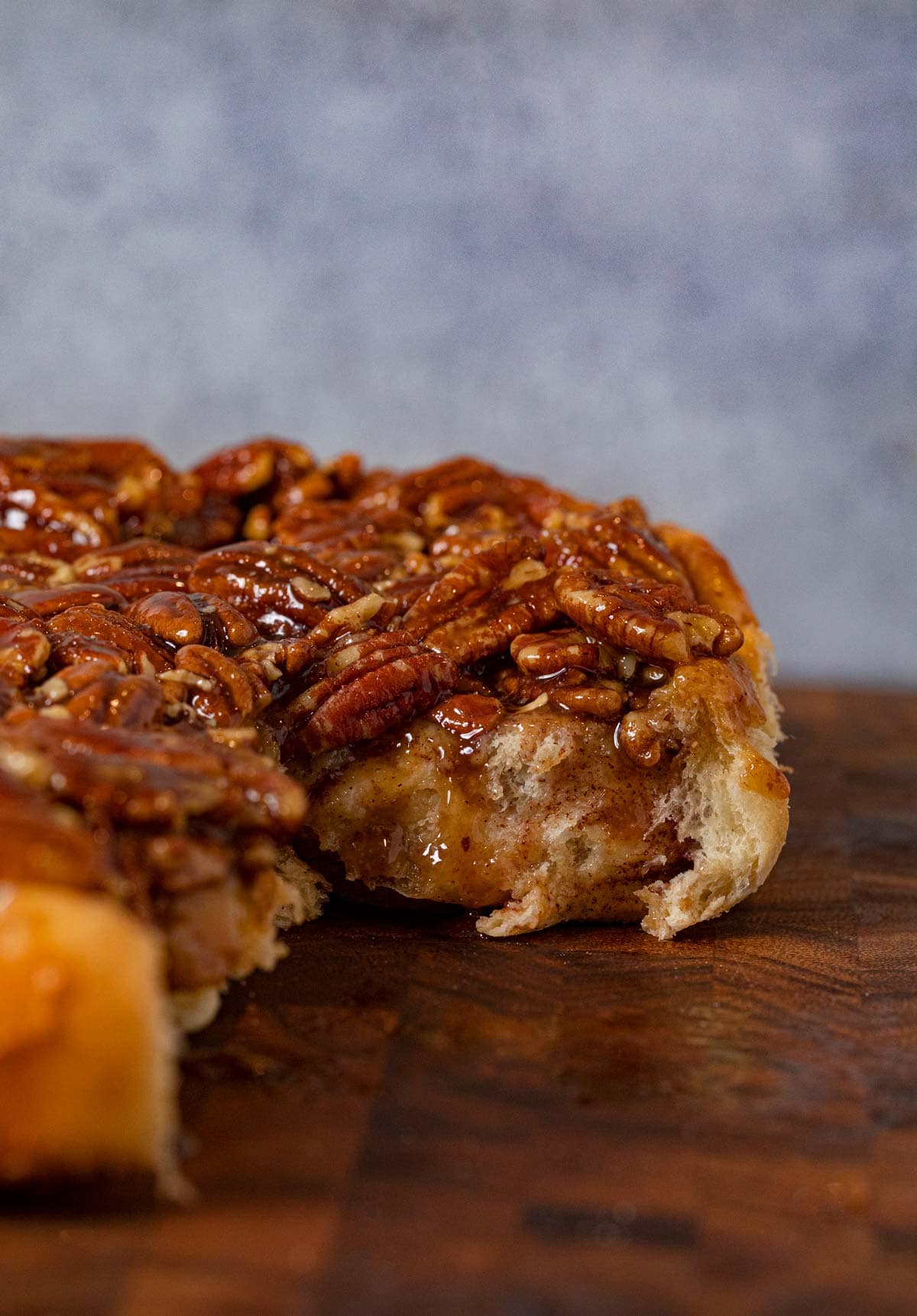 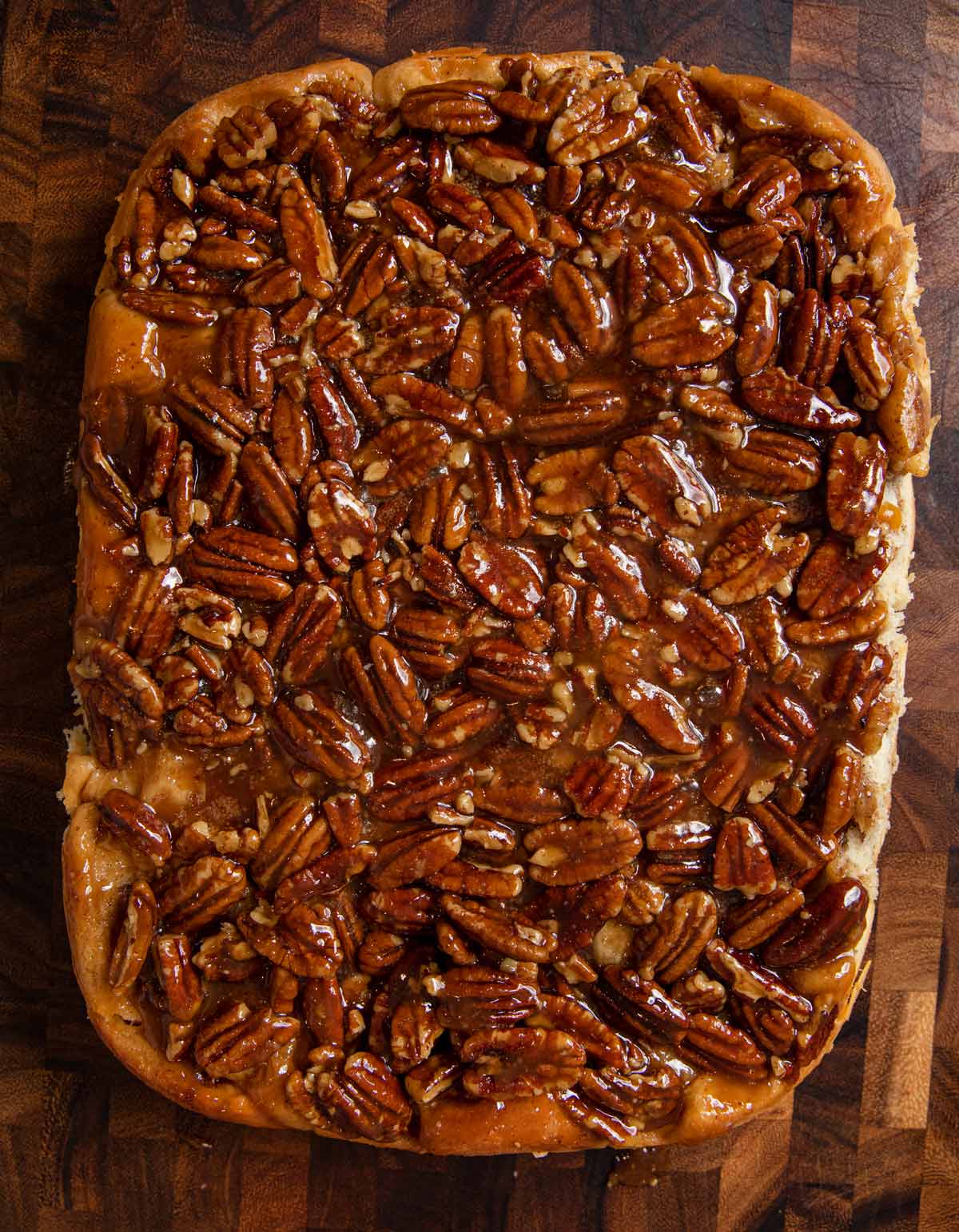 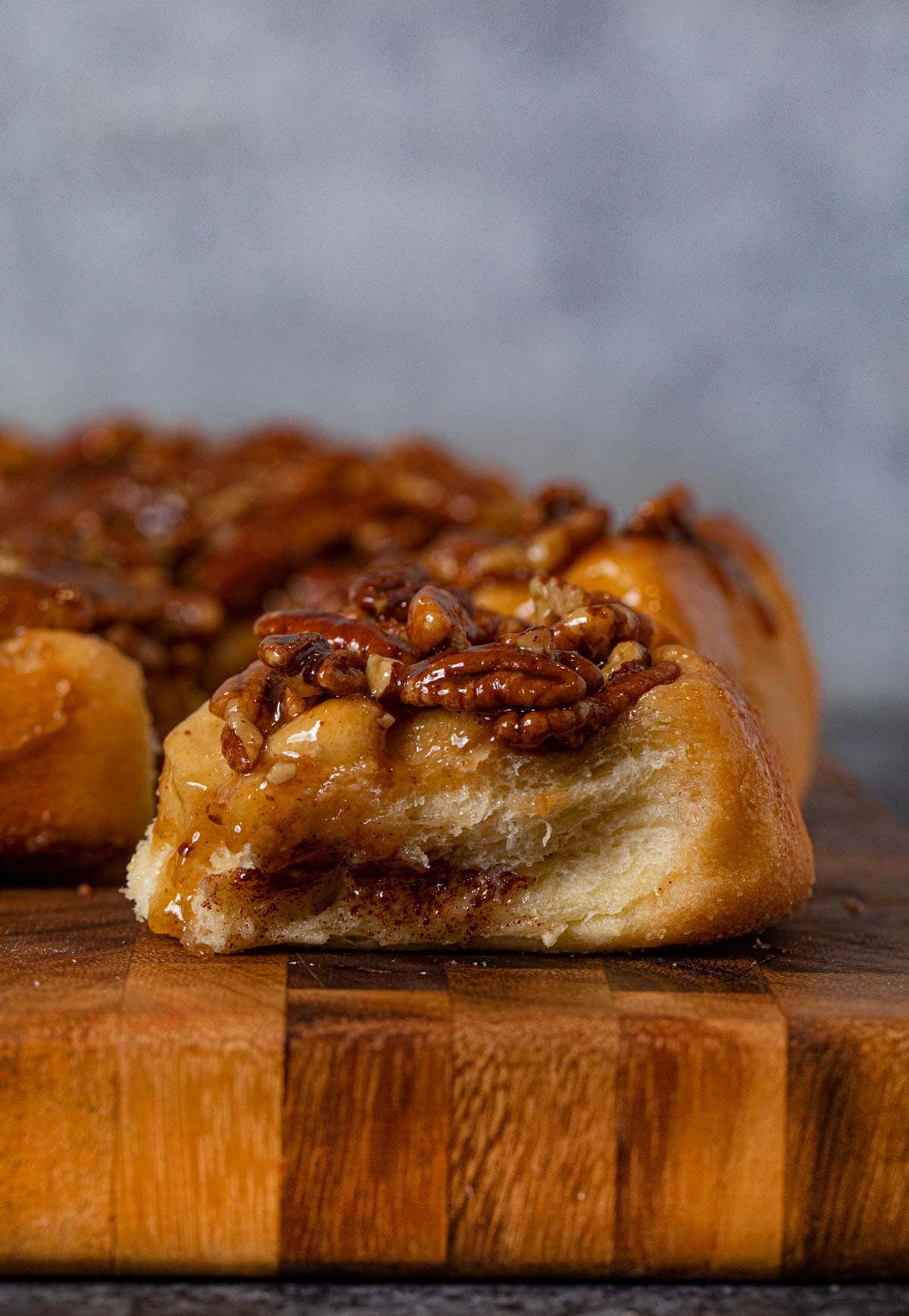 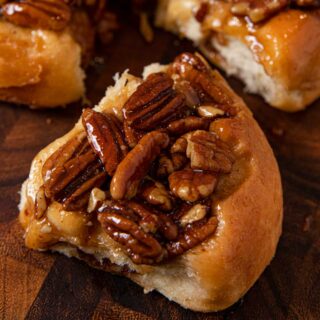 PRO TIP: COVER YOUR MIXER WITH A CLEAN DISH TOWEL TO PREVENT FLOUR FROM ESCAPING MIXER Tip 2: If you find sticking add flour ¼ cup at a time until it pulls away (no more than another cup) Note: The dough will make 18 large cinnamon rolls. Proofing Tip: I have a second oven, so I heat it to warm when I start the recipe, then turn it off and open the door for a couple of seconds then close the door. The residual warmth is perfect for these rolls.