Move over Easy Cinnamon Rolls, this all-in-one Breakfast treat has all you need. Savory sausage, fresh fruit, and sweet cinnamon-y goodness baked in one delicious bun! 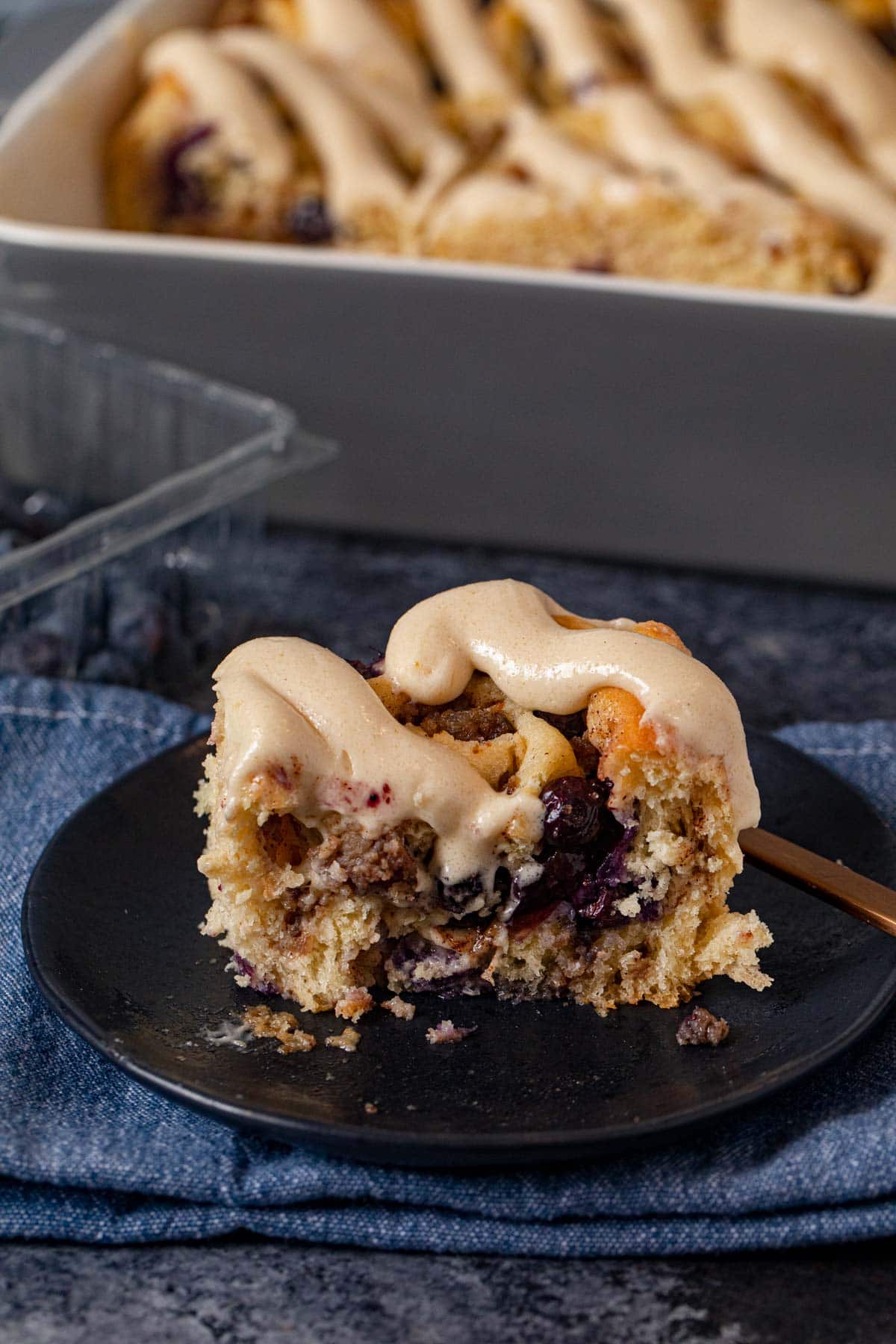 These sweet and savory cinnamon rolls are unlike any breakfast buns you’ve ever had before! The saltiness of the breakfast sausage perfectly balances out the sweetness in the filling and the icing, and the juicy fresh blueberries just burst in your mouth. You’ll be craving these delicious, special rolls all year long! 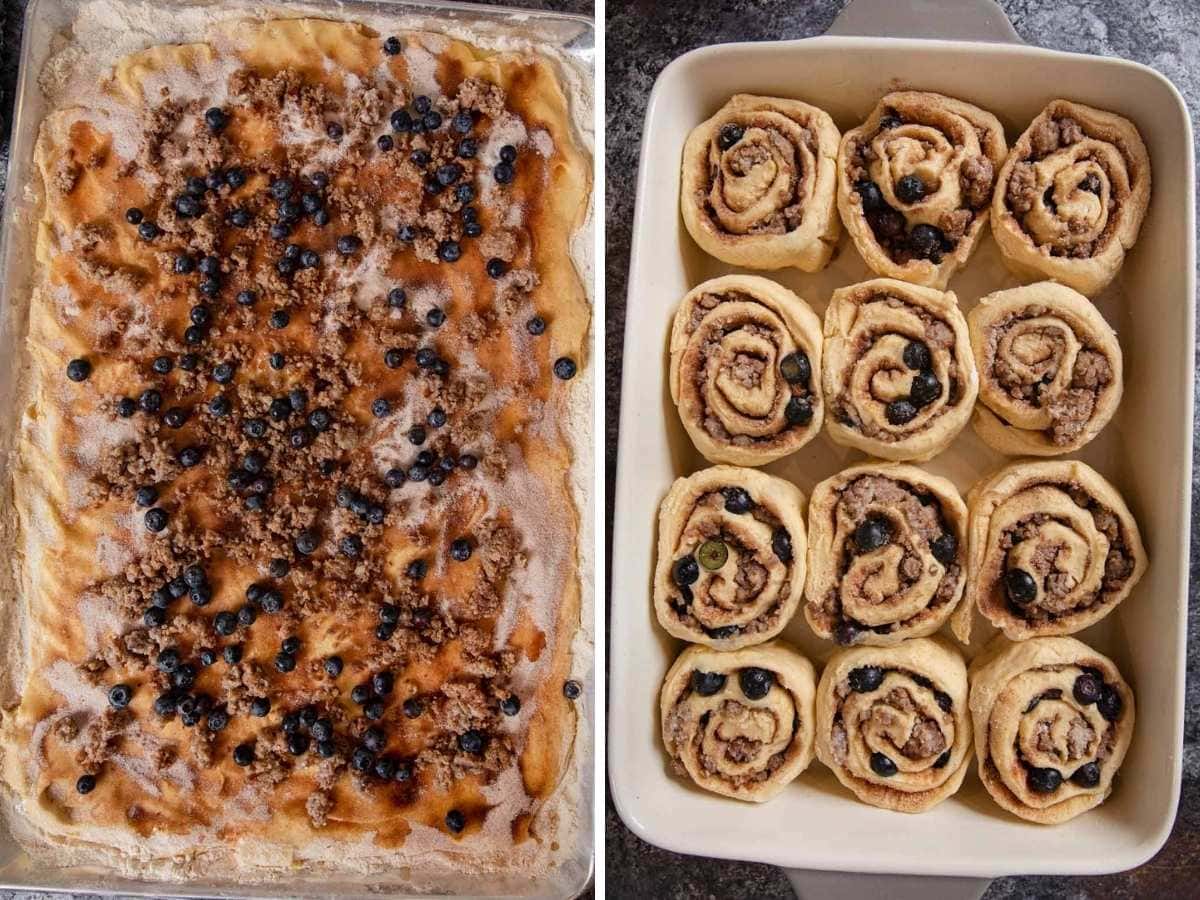 Part of what makes these Sausage Blueberry Cinnamon Rolls so special is the breakfast sausage baked right into the dough! Sausage adds so much flavor, making the rolls melt-in-your-mouth delicious, plus the extra moisture keeps them tender and soft. Rolling the sausage in the dough also makes sure you get that salty sweet goodness in every bite.

You won’t believe how easy it is to make Sausage Blueberry Cinnamon Rolls from scratch! Our easy cinnamon roll recipe is a fan favorite because it’s made in minutes with step by step instructions any one can master. Once you start making homemade cinnamon rolls, you’ll never go back to the canned dough again if you can help it. 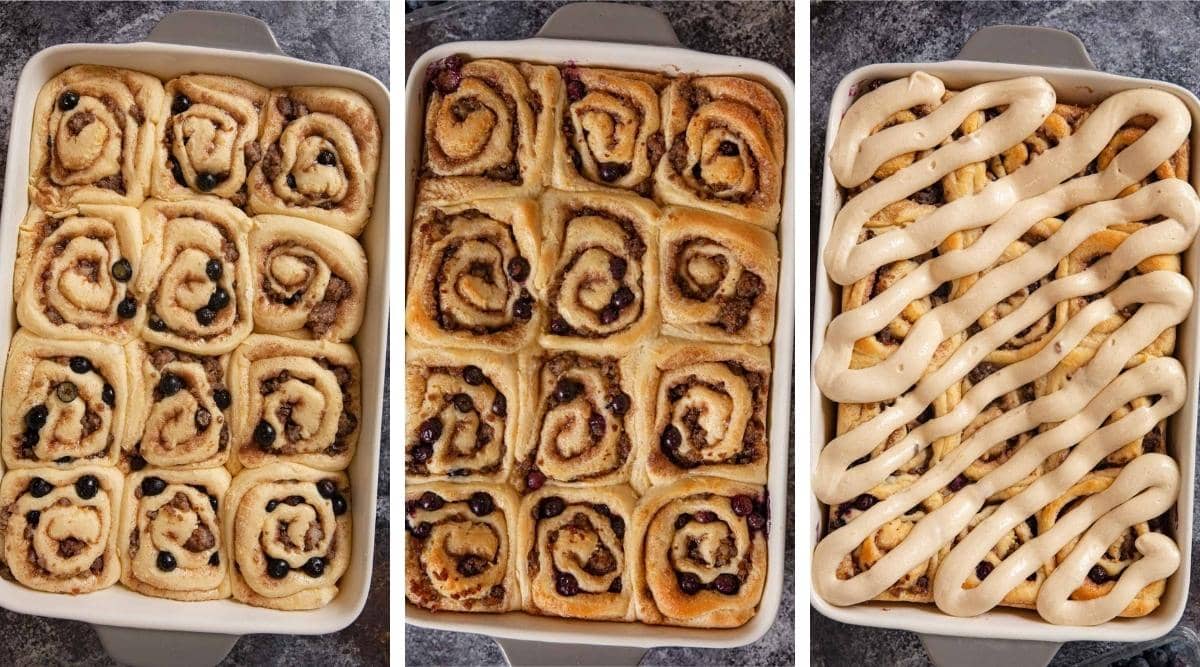 You can make these Sausage Blueberry Cinnamon Rolls the night before for an easy, yet fancy breakfast. Your filled rolls will rise overnight in the fridge instead of at room temperature. Make the rolls like normal, place in greased pan, and refrigerate wrapped tightly with plastic wrap. The next morning, bring the rolls to room temperature and bake as usual.

You could also use this method to freeze a batch of cinnamon rolls. Either make a second batch or divide this large batch in half, baking one now and freezing one for later. Bake cinnamon rolls from frozen by adding an extra 10-15 minutes, or thaw overnight in the refrigerator before baking. 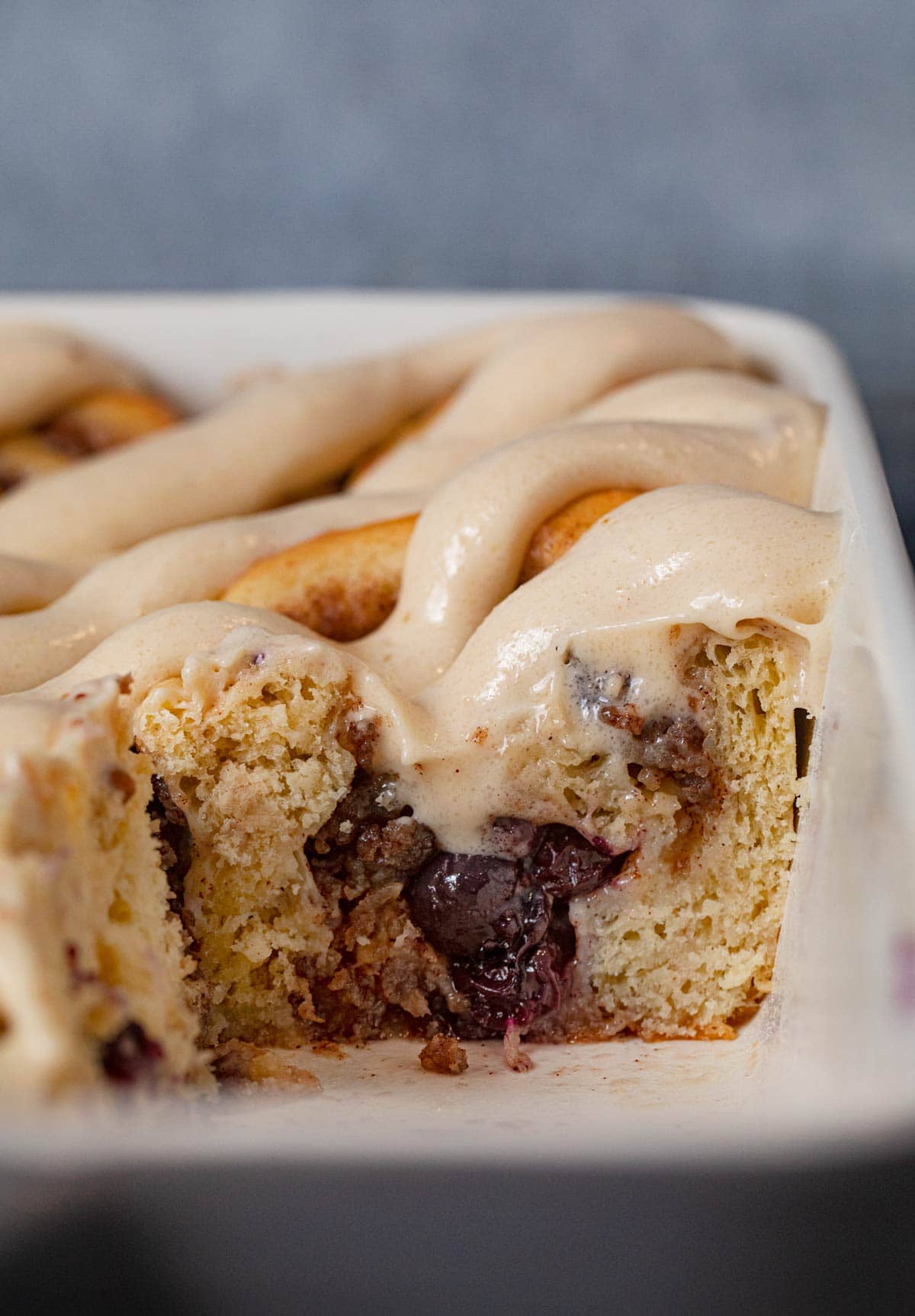 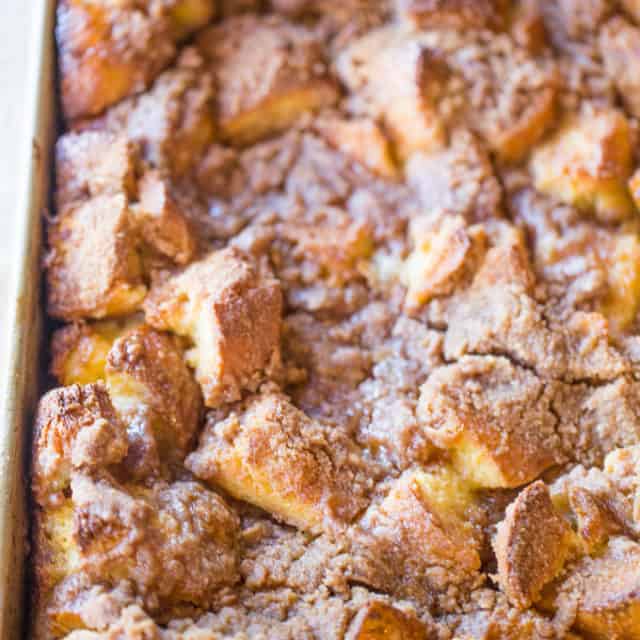 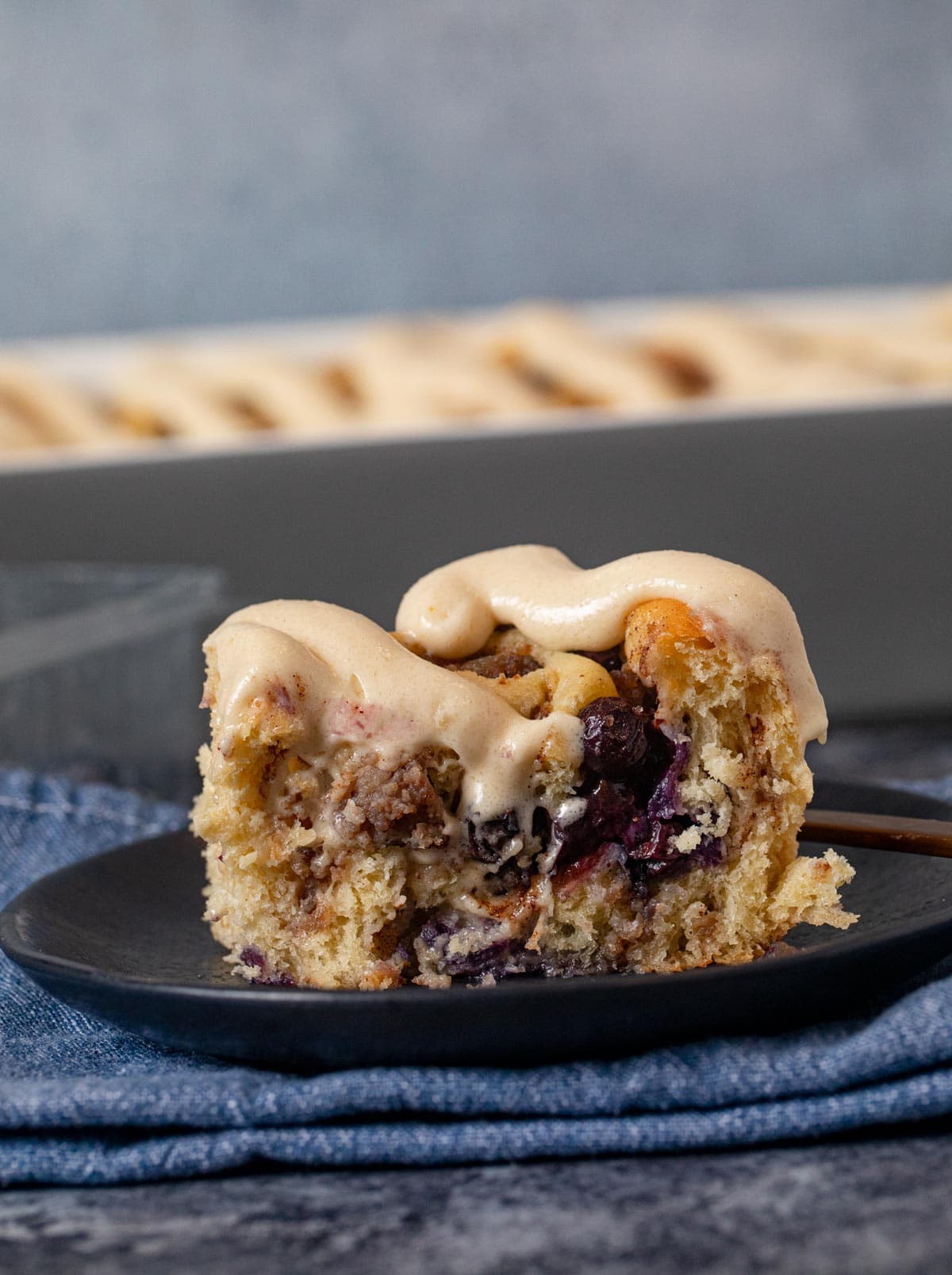 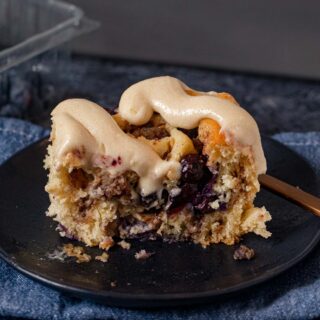 PRO TIP: COVER YOUR MIXER WITH A CLEAN DISH TOWEL WHILE MIXING SO FLOUR DOESN'T SPRAY OUT. When you are adding the sausage, if you find the dough sticking you can add flour ¼ cup at a time until it pulls away (no more than another cup). For the proof: I have a second oven, so I heat it to warm when I start the recipe, then turn it off and open the door for a couple of seconds then close the door. The residual warmth is perfect for these rolls.