Baked Ham with Brown Sugar Glaze made with orange juice, honey, and spices is the PERFECT sweet and savory holiday dinner, and bakes in only 90 minutes!

Baked Ham with Brown Sugar Glaze is the PERFECT dish to serve on the holidays. You can decorate the ham with cloves or pineapple to add more to the presentation, or serve with just the brown sugar glaze.

If you’re having a lot of guests, make 2 or 3 hams. Then set out serving trays layered with pineapple, then baked ham slices, then sliced pineapple rings decoratively on top. Also put out a dish of mustard and some extra glaze for dipping.

If you don’t have brown sugar for the glaze, you can use white sugar in its place. If you do this, try to add a spoonful of molasses or maple syrup to get some of that deep flavor back, but it’s not mandatory. You can also remove the tinfoil and broil in the oven for a few minutes after the ham is done cooking, to get really nice browned caramelized sugar from the glaze on top.

Another favorite for get-togethers is this Honey Baked Ham copycat recipe. Honey baked ham copycat is done in the slow cooker and ready in about 3 hours, which is perfect if you’re low on oven space. Honey Baked Ham makes for a special dinner on Christmas eve.

Can I bake a ham overnight?

Technically yes you can at a lower temperature, but you should always worry about leaving the oven when nobody’s there to watch it. A safer alternative would be to make this Slow Cooker Brown Sugar Pineapple Ham recipe, with an uncooked whole ham, on low for 8-10 hours or until it comes to temperature. There’s no need for basting because it will self-glaze in the slow cooker by itself.

How long do you cook a ham in the oven?

Once you preheat the oven, a ham will need about 15-20 minutes per pound to cook, at 350 degrees. For food safety, ham needs to be cooked to a least 145 degrees. Always have a good food thermometer on hand when you’re preparing food on the holidays.

How do I cook a precooked ham?

A precooked ham should be cooked in the oven at 325 degrees for 10 minutes per pound, or until it reaches 145 degrees, according to the USDA. If you’re reheating a ham that was repackaged or leftover, it needs to be cooked to 165 degrees F.

This isn’t because you are cooking raw meat, this is because anytime you cook something it immediately begins growing bacteria. This is due to the fact that people touch it, that organisms in the air touch it or even the plates it is served on are touching it.

When you cool it back down again the food bacteria for lack of a better word is mostly dormant but to kill that bacteria and make it safe to eat it is really best/safe practices to heat it back to 165 degrees before consuming it again.

How do I make baked ham with pineapple?

For the glaze, substitute the orange juice with pineapple juice. In the last half hour of cook time, pour the glaze over the ham along with a can of crushed pineapple, and bake uncovered. Decorate with sliced pineapple rings and maraschino cherries before serving.

What to Serve with Baked Ham

How to Store Baked Ham 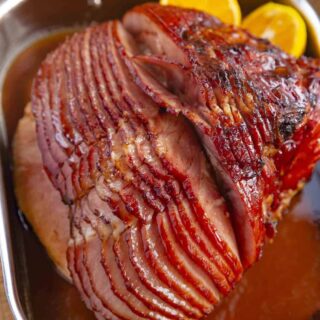