Korean Kalbi BBQ Short Ribs are flavorful and sweet, made from flanken short ribs marinated all day long, then baked or grilled to perfection!

These ribs are incredibly flavorful, and if you’re looking for another Asian dish to try you’ll love my Orange Chicken, Mongolian Beef, and Teriyaki Chicken.

Korean Kalbi BBQ Short Ribs are the PERFECT combo of sweet and savory, made from flanken ribs in a marinade of brown sugar, sesame oil, soy sauce, mirin, and spices. It’s one of my all-time favorite Korean dishes because it’s also incredibly easy to make.

The best part about this Korean BBQ is that you can make it all summer on the grill, and in the oven when the weather is too cold. If you can’t find mirin at your grocery store, try replacing it with about ½ teaspoon of sugar per 1 tablespoon of white vinegar or dry white wine.

Kalbi is marinated overnight, which means the marinade is a pretty big part of this recipe. Use a combination of low sodium soy sauce, sesame oil, and mirin, with spices, brown sugar, and onion. You can substitute the pear for kiwi in this kalbi marinade recipe. The fruit helps tenderize the meat, which is really important for the finished texture of your Korean bbq ribs.

You’ll want to marinate the meat for a minimum time of 24 hours, because it can give the kalbi an amazingly sweet and savory flavor and soft texture. If you’re looking for some side dishes to serve with these ribs, try serving alongside Macaroni Salad, Fried Rice, or Egg Rolls.

What is the best meat for Korean Kalbi BBQ?

Kalbi is made with flanken-style short ribs, which means the beef is cut thin to around ½ inch thickness, and across the bone, leaving a few bones to each rib. Flanken ribs can be cooked quickly, which makes them best for beef rib recipes that call for broiling.

What is the difference between Bulgogi and Kalbi?

Kalbi (Galbi) is a recipe that uses short ribs, while bulgogi uses ribeye steak. Both of these dishes use a similar marinade.

How much Kalbi (Galbi) should you make per person?

You should plan on ½ – ¾ pound per person, more if you have some BBQ lovers because much of the portion is going to be discarded as bone or connective tissue. When planning for larger eaters you can actually do 1 pound per person.

What to Serve with Korean BBQ

Slow cooking short ribs is a great cooking method because they get to the point where they’re falling-off-the-bone tender, plus they get to cook in their marinade all day long. 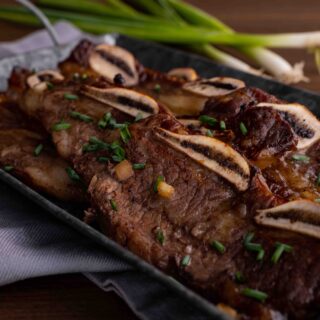 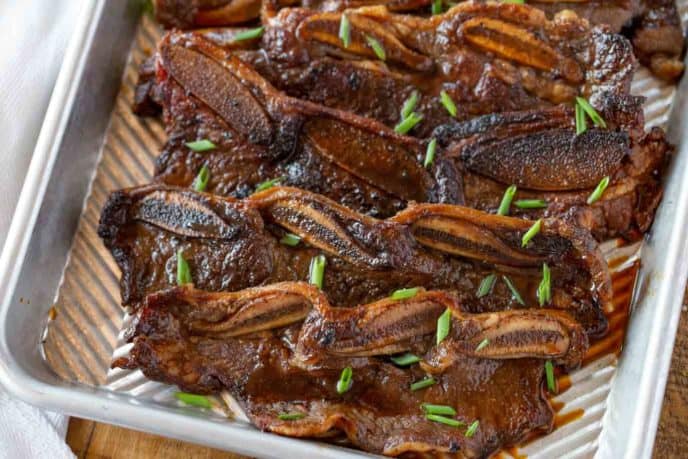